Lady Ella gets a stamp 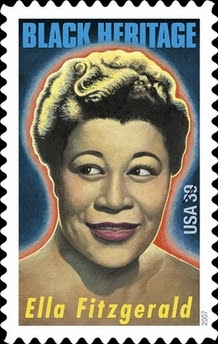 "The First Lady of Song," Ella Fitzgerald, got her own stamp on Wednesday. It's the 30th stamp in the U.S. Postal Service's Black Heritage series. She was one of Frank Sinatra's favorite singers, and they appeared on the same stage over the years, in television specials in 1958 and 1959, and again in 1967's A Man and His Music + Ella + Jobim. Fitzgerald's appearance with Sinatra and Count Basie in June 1974 for a series of concerts at Caesar's Palace, Las Vegas, was seen as an important impetus upon Sinatra returning from his self-imposed retirement of the early 1970's.

The "Songbook" series of recordings she made for the Verve label in the 1950s and 60s are generally considered to be among the finest interpretations of the Great American Songbook ever pressed onto wax and vinyl. I highly recommend Sings the Cole Porter Songbook (sample: "Every Time We Say Goodbye") and/or Ella Fitzgerald Sings the Harold Arlen Songbook (sample: "Between the Devil and the Deep Blue Sea").
Posted by Chris at 9:38 AM

I love Ella - did she ever have some pipes on her! I've got to get that stamp!!!

LOL, she could belt it out! And she could sing scat like she was speaking in tongue.