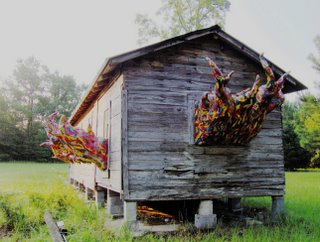 Explanation from the July print edition of Buzz Texas magazine:

"Burning House, a site-specific artwork/installation by SFA alums Clint Alexander and Emily Sloan Alexander, is located on the east side of Hwy. 59 about 40 miles south of Lufkin, between Seven Oaks and Legget. It is a permanent installation. The pair of artists added flames, made of canvas wrapped around fencing and then painted, to the 19th century shotgun house to create 'contemporary folk art, examining the socio-economic beginnings of East Texas and creating a new life of such relics through the creation brought through pseudo-destruction. It is also a form of activism, bringin art into under-represented areas,' Sloan Alexander said." 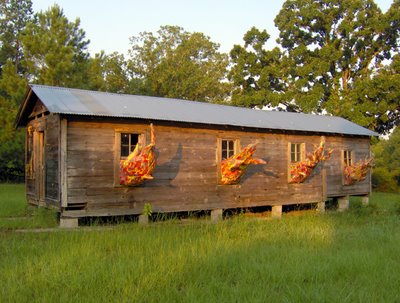 March 2007 UPDATE: On the day I went, I had to climb over a gate to get close to Burning House. But I felt okay about it, because this was something its creators wanted people to see. I've driven past it now many times (now that I know it's there), and it looks as if it is a lot more visitor friendly. I think there's a comment box, and it may be easier to get in and out of the gate.

January 2008 UPDATE: Dismantled. The house has new boards on the exterior. The windows may have been boarded up. I think the flames are part of a pile of wood just to the left of the house.
Posted by Chris at 2:46 PM

Very cool -- it reminds me of the Inversion installation that Houston Art League did last year.

I know I'm not the only person that sings "three hun-dred six-ty five de-gree...BURNIN' DOWN THE HOUSE" when they look at that art installation...right?

For sure, I almost titled the post "Burning Down the House."

Thanks, now that's stuck in my head.

I'm ashamed to say I haven't been here in a while...backtracked in when I saw my "Inversion" post was linked. ;-) What time of day were the photos taken? The light looks very soft and I'm thinking if you shot it at just the right time on just the right twilight evening that house really would light up. Of course, one of the great things about this house is that unlike Inversion, this installation is permanent. I wonder if it takes much upkeep...will they have to brighten up the flames after a couple of years in the Texas sun? (Btw, "Burning Down The House" is playing in MY head, too.) ;-)

I took those Tuesday morning, around 7. I saw a picture of it in that Buzz magazine the day before, and seeing it became a quest. I had to jump a barbed wire fence to take my pictures (with Judas Priest's "Breaking the Law" playing in my head). There weren't any "no trespassing" signs, and there was even a comments box on the gate post, so I didn't feel too uncomfortable doing so. I don't know if they plan to do maintenance on it, or not. They should!