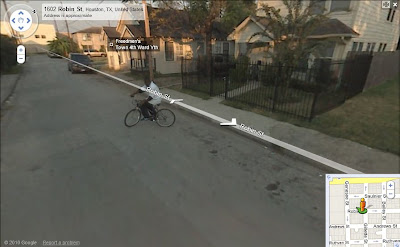 *Had a surreal experience as I tried to get a decent picture of the Temple of Rest. The Temple of Rest is a historic Houston landmark because it was designed by architect Joseph Finger, who is also buried there. The Beth Israel Cemetery is the first Jewish burial ground in Texas. It was established in 1844. So it is a very old part of Houston. The area's historic name is the Fourth Ward and it has a reputation, I think, for being a rough neighborhood at some point in its history. I happened to drive down an alley in the neighborhood pictured above, and drove past a gang a group of five or six young men who were sitting on the backdoor stoop of a house backed-up onto the alley. One of the young men either flashed the neighborhood sign or signaled to me he was "holding" as I drove slowly past him and his friends in that tight little alley. For a brief, terrifying moment I didn't know what to do. Do I wave? Do I acknowledge him at all? I figured it probably wouldn't be wise to flash him the sign back, seeing as I wasn't one of the gang members one of his pals. So I kept looking straight, straight ahead, with both hands planted firmly on the steering wheel.

According to Houston Deco, this place is endangered. There's also a picture of the cornerstone with the word "COLORED" engraved in it.

What has come before: 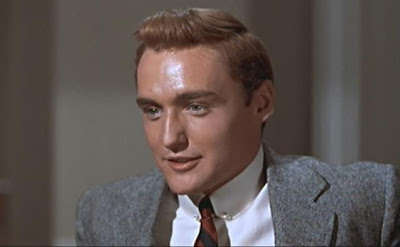 
These are a couple of old and older gas stations I've driven past numerous times in Lufkin. They are both fairly vintage, and it's nice to have things like this so close to home - a lot less driving!

I think this one must have been a Gulf:

It is virtually identical to this one in Houston, which is Station No. 157:

"The Music Goes 'Round and Around" 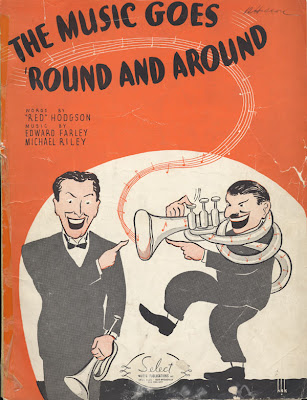 The music was written by Edward Farley and Mike Riley, the lyrics by Red Hodgson, and was published in 1935. The song was recorded by Tommy Dorsey and became a hit in 1936. The song was the musical interlude for the Columbia movie The Music Goes Round in 1936. 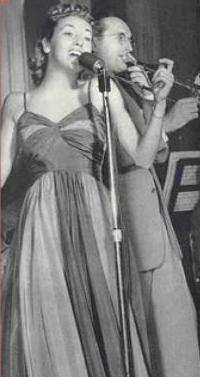 Edythe Wright with Tommy Dorsey
The New York Times wrote: "If we really wanted to be nasty about it, we could say that this Farley-Riley sequence is the best thing in the new picture. At least it makes no pretense of being anything but a musical interlude dragged in by the scruff of its neck to illustrate the devastating effect upon the public of some anonymous young busybody's question about the workings of a three-valve sax horn. Like the 'March of Time,' it preserves in film the stark record of a social phenomenon—in this case, the conversion of a song hit into a plague, like Japanese beetles or chain letters." (Wikipedia)

The Texas Historic Sites Atlas is an amazing resource for identifying historic structures. I used it extensively to identify and find information about these in Lufkin. Many of these old homes could be easily overlooked if a person didn't know to look for them. As is currently the case, I am most interested in finding old Victorian homes, built from 1880s to 1900s. I seem to be fixating a bit on the Queen Anne "school" of Victorian architecture. These are in the order (chronological) I found them, and not all of them are Victorian:

Good example of architectural style. Built for Dr. Clark, the Angelina County Lumber Company physician. Example of high style residence built for a high ranking official t the mill. Closely associated with sites No. L-526 and L-529, also Angelina County Lumber Company residences. Described by Lita Maberry as a "Type A" house distinguished by their size, spacious fenced yard, and location in the community. Each house was painted white, had eight to 10 rooms, and was equipped with all modern conveniences. Each Type A house was usually attached to a garage and could be found in groves of oak trees.

Good example of style (Bungalow/Craftsman). Mr. Walter C. Trout (1874-47) moved to Lufkin from Milwaukee, Wisconsin, in 1905 as general manager of Lufkin Foundry and Machine Co. He helped to expand the company from the lumber industry to include oil industry. W.C. Trout and his father, W. H. Trout owned a number of patents on sawmill equipment. He joined Lufkin Foundry nd Machine Company after being a sawmill machinery salesman for Allis - Chalmers Company. In 1938 he was one of the organizers of the Texas Foundries, Inc., another major industry in Lufkin.


It still has its horse hitching post out front:

It had a cool, matching carriage house: