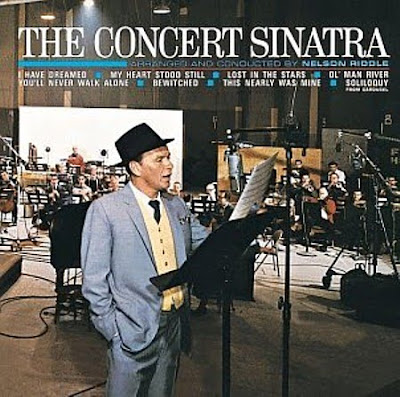 The title refers to the larger-than-normal orchestra Nelson Riddle gathered for this recording; it is not a documentation of a live performance. This was Frank Sinatra's most fulfilling album of his early Reprise career. It was allegedly Nelson Riddle's favorite Reprise album and was originally recorded on 35mm tape.

Some quotes from my personal Sinatra bible, Sinatra! The Song Is You: A Singer's Art 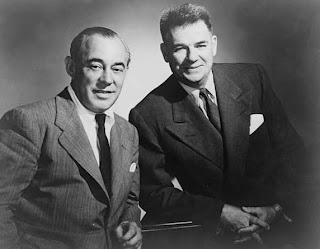 Richard Rodgers and Oscar Hammerstein
...The Concert Sinatra derives just as much from Sinatra's career-long quest for extended song forms as it does from his partnership with Riddle...Concert goes for the most high-browed works they can transform into ambitious "concert" arrangements. Concert also represents the closest Sinatra would come to a composer "songbook" album...All but one (Kurt Weill's "Lost in the Stars") of its eight extended selections derive from Richard Rodgers and/or Oscar Hammerstein. (pp. 260, 261) 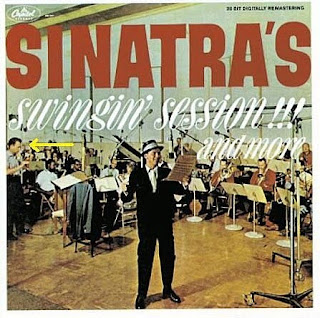 Nelson Riddle in 1960
If the 1956 Close to You represented Sinatra and Riddle at their most intimate, Concert Sinatra finds them at their most epic. Where Close utilizes a chamber group, Concert deploys a complete symphonic contingent. (p. 261) 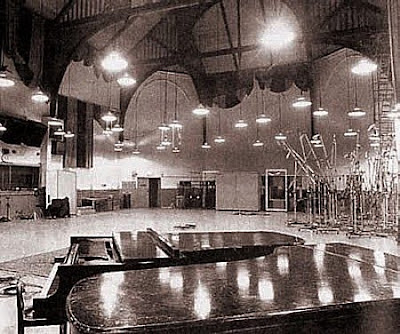 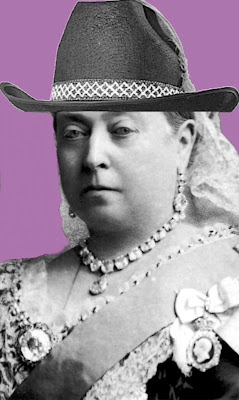 The Island of Misfit Toys 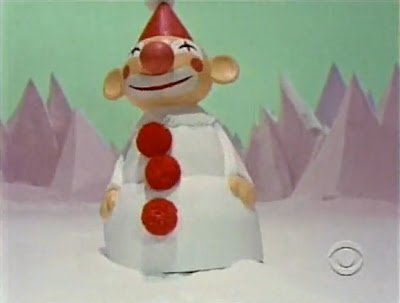 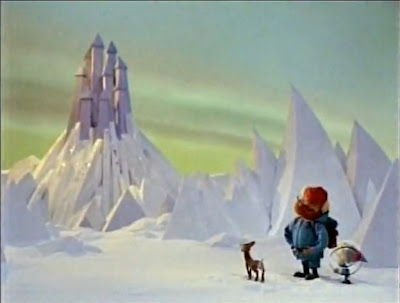 The "The Island of Misfit Toys" segment from the 1964 Rankin-Bass special, Rudolph the Red-Nosed Reindeer, is like some sort of strange, soft and colorful hybrid of Freaks (1932) and The Misfits (1961) (imagine if you will: Clark Gable's character is Yukon Cornelius, Marilyn Monroe's character being Hermy...). From the Wikipedia entry:

The "Island of Misfit Toys", another canonical addition to the original story, is an island sanctuary where defective and unwanted toys are sent. Among its inhabitants: 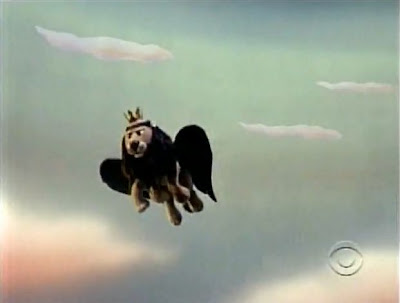 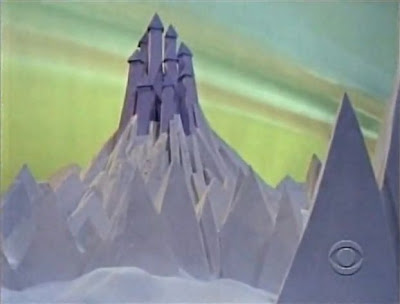 The Freaks The Misfits 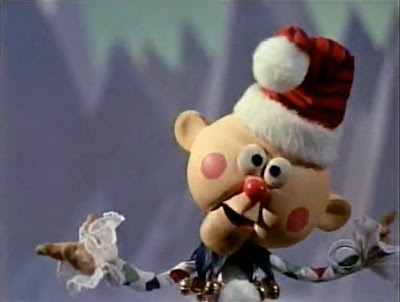 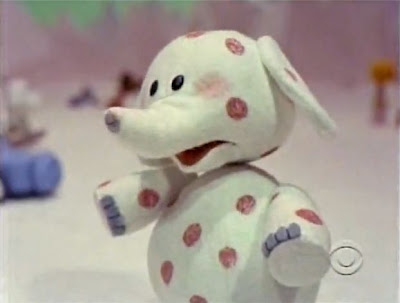 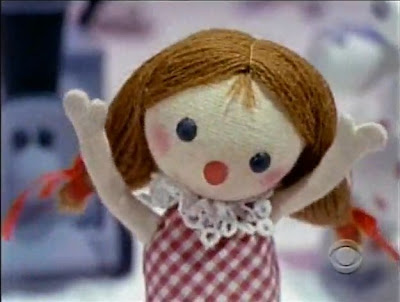 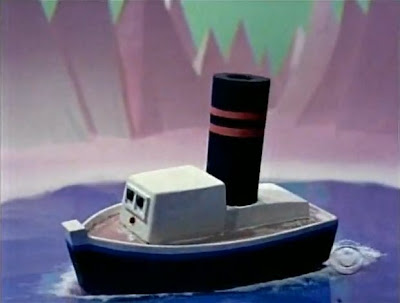 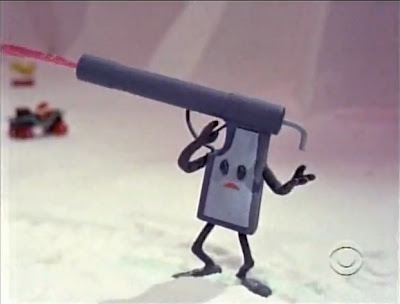 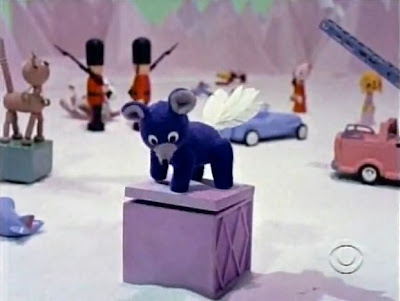 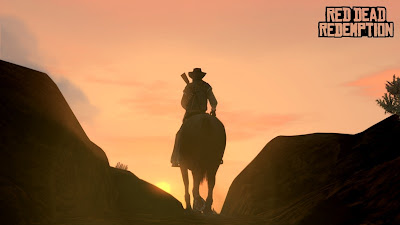 Well, I know one thing I'll be doing in April. I love the Grand Theft Auto videogame series, and have ever since the franchise jumped onto the Playstation platform back in October 2001. I was hooked at that point on, so like most GTA junkies, I endured the unspeakable two years between my favorite of the series, Vice City (2002) and the epic, massive, overwhelming reworking of the series, San Andreas (2004), by getting my fix playing the inermim games from the GTA series' creator, Rockstar Games, including the ultra-violent and gory Manhunt (which was just too creepy and unpleasant to really enjoy) in 2003 and the Western-themed Red Dead Revolver in spring 2004. One could see back in 2004 how Rockstar was attempting to put a Sergio Leone Western-style template on its Grand Theft Auto game engine and by then legendary and revolutionary "sandbox" approach to game play with Red Dead Revolver. But it, like Manhunt, felt more to me as if Rockstar games was simply experimenting with things like new weapon targeting systems, game play mechanics and physics, as well as the A.I. of non-player characters in the game. Therefore, both games, in my humble onion, suffered as a result. While interesting in each, its own unique way, both games fell flat when compared with any Grand Theft Auto game. So I was amazed to learn Rockstar had tried again with the Western genre and will release Red Dead Redemption in the spring of 2010. It looks like it'll be fairly amazing: 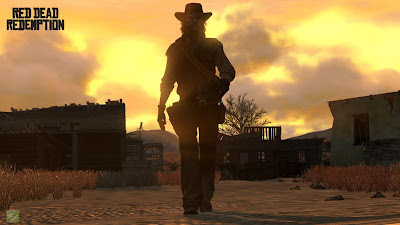 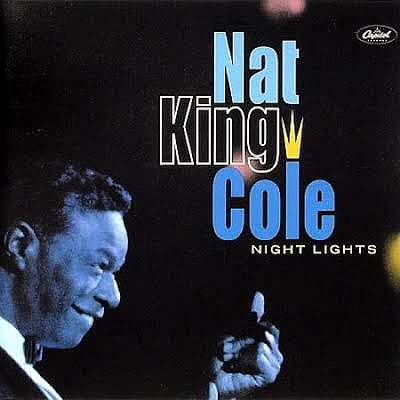 I'd never heard of this Nat King Cole recording, from a 2001 re-release, but it's one of those times where, although I've never heard the song before (I don't think), it sounds utterly familiar. It's a 2001 rerelease of this material, featuring the singer's (and Frank Sinatra's) arranger/conductor, Nelson Riddle. Perhaps that's why this sounds so familiar to me. Whatever is the case, I just love this kind of stuff. It's so elegant and delicate, yet it swings like a mother. I think if I could go back in time to any place in the 20th century, I think it would be this era.

There is no Wikipedia entry for it, but the Amazon description is as follows:

Night Lights is the Nat "King" Cole album that time forgot. Recorded with Cole's regular musical director Nelson Riddle over Christmas and New Year of 1955-1956, it's never been released complete until now. This is Cole as pop singer rather than jazz pianist, and while the album is only now making its debut on this 24-bit digitally mastered CD, several numbers were released as singles and became chart hits: "Too Young to Go Steady," "To the Ends of the Earth," and "Never Let Me Go." That still leaves 12 cuts which have never been issued before, and as these were all brand-new songs at the time, that makes them world premiere recordings. The nostalgic "Sometimes I Wonder" plays virtually as a trial run for Cole's classic take on "Stardust," while "Once Before" and "I'm Willing to Share This with You" add ethereal voices in distinctive 1950s Hollywood style. Impeccably produced, with sophisticated arrangements by Riddle that balance lush strings, subtle rhythms, and instrumental colors from instruments such as flutes and celesta, this is warm-hearted, tender, and glowingly romantic music. Though they don't match the very best in Nat "King" Cole's catalog, these 20 ballads still make a fine album. They sat on the shelf for decades but the restored sound is first rate.
Posted by Chris at 11:13 PM No comments:

Marker for Louise Mueller in the Old City Cemetery (oldest marked grave is from 1840), La Grange. 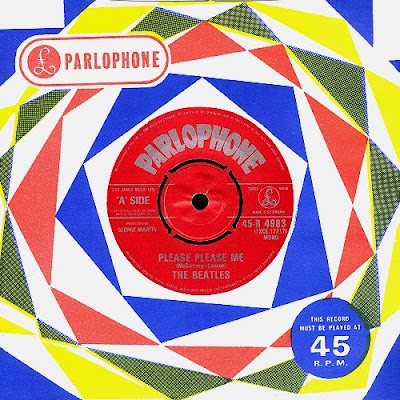 Information from the Wikipedia entry:

"Ask Me Why" is a song by The Beatles originally released in the United Kingdom as the B-side of their hit single "Please Please Me." It was also included on their first UK album, Please Please Me. 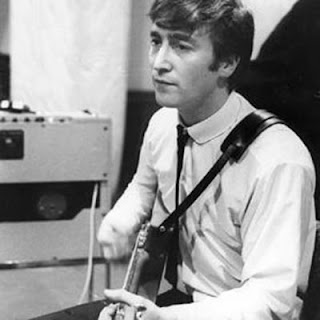 Written in early 1962, "Ask Me Why" is principally a John Lennon composition, but was credited to Paul McCartney and John Lennon, as were all other Lennon/McCartney originals on the first pressings of Please Please Me album. It was part of their live act prior to their recording contract, and was one of the songs performed at their Parlophone audition in Abbey Road's studio three on 6 June 1962. The song emulates in style that of Smokey Robinson and the Miracles, by whom Lennon was influenced, and draws its opening guitar phrase from the Miracles’ "What’s So Good About Goodbye" (1961). 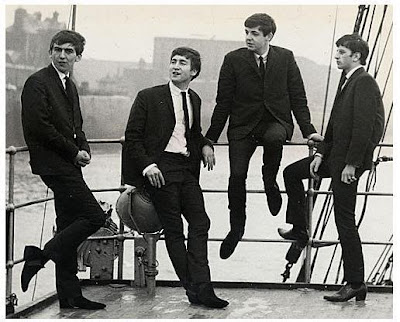