A return to Henderson


I've been through Henderson a few times before, and I stopped there again on the way home from a trip to Longview this past weekend. The main objective in Henderson was this:

But there was also: 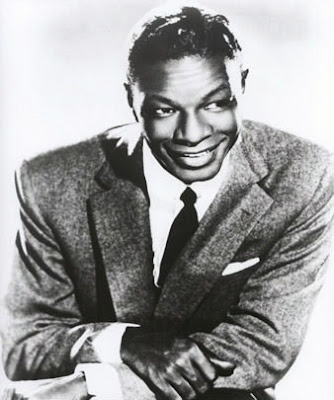 Another beautiful tune as interpreted by Nat King Cole, this one discovered whilst watching Badlands. The best known and commercially successful version of "A Blossom Fell," Cole's version reached #2 on the Billboard charts in April 1955 (source).

Lingerin' in Longview as the day begins


I was really lucky with the clouds on this morning!

I had no choice but to pull over to get this movie theater, all lit up at 7 am, on Saturday morning.....Wait, what?

Okay, so you've seen the sunrise in Longview. How about the moon fall?

Looking down North Fredonia Street at the Petroleum Building 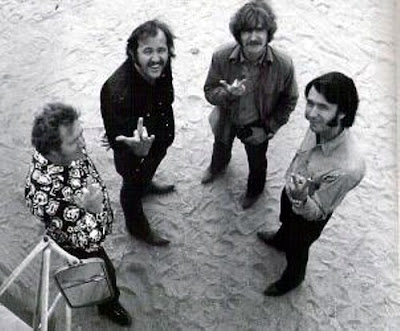 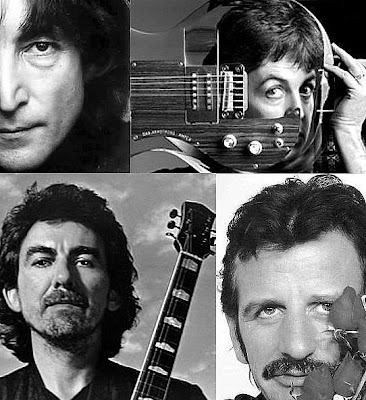 I've posted before about imaginary Beatles-reunion music mixes, but I'd never come up with one of my own. John Lennon's recent seventieth (wow) birthday had me thinking a bit more seriously about it. What if.....John Lennon hadn't been assassinated until 1989 (or not at all)? What if The Beatles had been able to reconcile their contractual/money and personal issues to reconvene (in earnest) to record at least one more album?

Obviously, all four Beatles never again recorded anything together after the Abbey Road sessions in 1969. So for the purposes of this mix, the limitations for choosing songs are for things recorded from Lennon's last creative output (for the Double Fantasy sessions in 1980) up to the year 1989, which was when Paul McCartney's above average (for him) Flowers in the Dirt was released. That album contains a couple of songs I can definitely imagine The Beatles recording, as I will explain.

So between 1980 and 1989, this would include, from John, Double Fantasy and the posthumously released Milk and Honey (recorded late August 1980, released in 1983). From Paul, McCartney II (released in mid-1980), Tug of War (1982), Pipes of Peace (1983), Press to Play (1986), and Flowers in the Dirt (1989). For material from which to possibly select songs, I'd exclude McCartney's movie soundtrack, Give My Regards to Broad Street (1984), which except for a favorite of mine, "No More Lonely Nights," was simply re-recordings of Beatles compositions, and СНОВА Б СССР (1988), essentially McCartney's version of Lennon's Rock 'n' Roll. From George, Somewhere in England (1981), Gone Troppo (1982), Cloud Nine (1987), and Traveling Wilburys Vol. 1 (1988). From Ringo.......well, er, I'll pretend the Fabs politely considered putting "Stop and Smell the Roses" (from his 1981 release Stop and Smell the Roses) on this imaginary album as the perfunctory one-per-album Ringo song, and then wisely decided against it. 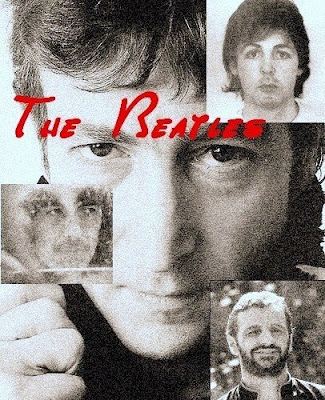 This then, perhaps, might have been the album they'd have released in 1989, which I'd call Everest (or maybe A Doll's House?):

People compared McCartney's collaborations with Elvis Costello on Flowers in the Dirt to those he did with John Lennon. Costello provided the sourness sorely lacking from McCartney's overly sweet work of the years leading up to Flowers in the Dirt, just as Lennon could do. McCartney and Costello's harmonies on "My Brave Face" were, I think, purposely contrived to be similar to those he and Lennon did on "Here, There, and Everywhere," "Baby's in Black," "We Can Work it Out," etc., etc., etc. Listen to the line in the chorus "take me to that place" where the harmony vocal goes down on the word "place" -- that's Lennon and McCartney!

Also, I like to believe the lyric "Now I don't have to tell anybody when I'm gonna get back" is a reference to "Get Back." I think McCartney's expression at 1:16 in the video confirms my belief. "My Brave Face" sounds like a deliberate attempt by McCartney (and Costello) to be Beatlesque, right down to the first reappearance (the video for "Coming Up," notwithstanding) since the Beatle days of his Hofner bass (complete with Candlestick Park play list, still taped to it). Anyway, it could have been a pretty decent opening song to the first "real" Beatles album in twenty years...

Perhaps an obvious song to begin any "new" Beatles album, and it was difficult to decide whether I'd start it off with this or "My Brave Face," but I like how The Beatles ("The White Album) began with Paul's "Back in the U.S.S.R." and lead (bled) into John's "Dear Prudence." They even could have mixed it so as "My Brave Face" is fading out, the chimes at the start of "(Just Like) Starting Over" begin.

Annoying in its way, perhaps, but The Beatles could have made it work (damnit)! John Lennon supposedly liked the song, and it is credited with having partly driven him out of retirement to return to "riding on the merry-go-round."


"Heading for the Light"

A beautiful Harrison composition, recorded, of course, with the Traveling Wilburys. I've always imagined it was John and Paul (and George) doing background vocals.

We know how Paul felt about this one. Don't you know he could hear himself doing harmonies with John? A nice way to end side one.

As it was speculated to be a commentary of sorts on the post-Beatles break-up bitterness and quarreling between John and Paul back when McCartney released the album Tug of War (his first to come out after John Lennon's death), this song could have been a nice way of dealing with it on a "reunited Beatles" album. Bonus points for having been produced by Beatles producer George Martin. A lovely tune.

"When We Was Fab"

Favorite line: "Arrived like strangers in the night." Not as moving as "All Those Years Ago," but still a nice homage by George.

"What opportunities did we allow to flow by
Feeling like the timing wasn't quite right?
What kind of magic might have worked if we had stayed calm..."

I've heard somewhere the video depicts the formation and career (in a way) of The Beatles. Ringo plays drums (for real!).

No longer riding on the merry-go-round-hound!
I can clearly remember hearing this on the radio in those days after Lennon's death, back in December 1980.

"All Those Years Ago"

So beautiful...sigh.
The recording of the song featured all three remaining Beatles (Harrison, Starr and Paul McCartney), though this was expressly a Harrison single. It is one of only a few non-Beatles songs to feature three members of the group. Harrison and Starr recorded the song at Harrison's Friar Park studios between 19 November 1980 and 25 November 1980. After Lennon's death the following month, Harrison removed Starr's vocals (but left Starr's drumming track) and recorded his own vocals with rewritten lyrics honouring Lennon. McCartney, his wife Linda and their Wings bandmate Denny Laine visited Friar Park to record backing vocals. (source) 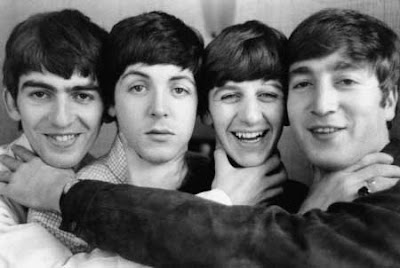 Originally called "American Cemetery," Oak Grove Cemetery is located on the 1826 land grant of Empresario Haden Edwards. The leader of the 1826 Fredonian Rebellion, Edwards is interred here. The earliest marked burial on this site is that of Franklin J. Starr (d. 1837), a native of New Hartford, Connecticut, and a local realtor.

Many graves from the early Spanish cemetery of Nacogdoches were relocated to this site when the county courthouse was erected on the Spanish cemetery grounds in 1912. The earliest grave from that burial ground is marked, "Father Mendoza," 1718.

"The monuments in Oak Grove Cemetery remind the visitor of the Romance and Remembrance of Old Nacogdoches." (source)

This quote in turn reminded me of another:

"As a young person during that period, I had felt Nacogdoches' enchantment, had worn its mantle of romance as I listened to ghost-voices of the past echoing from hill to stream and reechoing through narrow, winding streets. For me, light summer rain revived the scent of antiquity that permeated the main square like lingering musk..." (From Old Nacogdoches in the Jazz Age

Let's listen to a few of those "ghost-voices of the past," shall we?

Upright and just he was
in all his ways,
A bright example in
degenerate days.

His words were kindness
his deeds were love,
His spirit humble,
he rests above.

A minister of the primitive
Baptist Church, Charitable
to the poor and widows.

Gone but not forgotten

A precious one from us has gone
A voice we loved is stilled:
A place is vacant in our home
Which never can be filled.
God in His wisdom has recalled,
The boon his love had given,
And though the body slumbers here
The soul is safe in heaven.


FOR GOD SO LOVED THE
WORLD THAT HE GAVE HIS
ONLY BEGOTTEN SON THAT
LESLIE L. PIERCE WHO
BELIEVETH IN HIM SHOULD
NOT PERISH BUT HAVE
EVERLASTING LIFE.

GREATER LOVE HATH NO MAN
THAN THIS, THAT A MAN LAY
DOWN HIS LIFE FOR HIS FRIENDS.

"Mother, thou hast from us flown
To the regions far above;
We to thee erect this stone,
Consecrated by our love."

OUR MOTHER
SWEETLY SLEEP IN JESUS.

Oldest marked grave (1837) in the cemetery

Farewell my wife and
children all
From you a Father Chr
ist doth call.

Spouse of Frost Thorn, one of Texas' earliest millionaires

"I give and bequeathe the residue
of my property to the State of
Texas, to aid in the maintenance
and support of persons wounded
and maimed in our defense in
the present struggle of our Con-
federacy against the United
States Government; those from
Nacogdoches County, Texas, to
have preference."

Extract from the last will and tes-
tament of O. L. Holmes.

"I am one of nature's children
I love to look at the green trees."

Time takes all but memories

The gift of God is
eternal life.
She died just as this house (designed by Diedrich Rulfs) was being completed for her by her father, who was among the founding members of Commercial National Bank. It is said that Laura died in her first childbirth, and her husband sold the house and moved from Nacogdoches.

Flee as a bird to your
mountain, Thou who art sick
of sin. Go to the clean
flowing fountain Where you
may wash and be clean.

Blessed are the pure is heart
for they shall see God.

Husband of Anna Raguet and personal physician to Sam Houston

Gentle one, may thy grave
Peace and quiet ever have.
After thy short earthly tour:
Sweet rest seize thee evermore.

Merchant, public servant, and a financier of the Texas Revolution

The monument was erected by Henry and Marcia A. Raguet in memory of their two children Mary and Condy Raguet who lost their lives on the steamboat America during a storm on the Ohio River December 5, 1868.

SACRED
TO THE
MEMORY OF
MARY H.
DAUGHTER OF
HENRY & MARCIA A.
RAGUET.
WHO WAS LOST ON STEAMBOAT
AMERICA ON OHIO RIVER
DECEMBER 5, 1868
SHE WAS AN AFFECTIONATE
DAUGHTER SISTER & FRIEND

"How inscrutable are thy ways Oh God"