Rebirth of The Pines

Looking down First Street, January 2007
And then suddenly, one morning in April 2007, Lufkin awoke to find it in this condition:

No one is really sure what happened, but it was theorized an 18-wheeler or delivery truck somehow crashed in to it. It is in this state it sat for a while.

By May 2008, I'd pretty much given up on it ever being repaired.

I'd expected it to continue going down, but I was stunned to see it like this a year later, April 2009:

I had heard rumors that a restoration was under way, but this looked like more of a dismantling, which it was. But instead of destroying, the removed neon and giant green glass, inlaid fleur-de-lis, it was all being refurbished:

What's old is new again. In fact, it's downright shiny.

Way to go Lufkin! Bravo. You restore some faith in mankind.


Here is an article a friend and I did for our high school newspaper back in October 1984. It was about a "legendary" marking on an UTMB (University of Texas Medical Branch) building in Galveston, called "the Face." There are various stories and explanations as to its origin and who is supposedly depicted - disgruntled former UTMB patient, the owner of the property on which the building is now located, for example - but it just as easily could have been our theory... 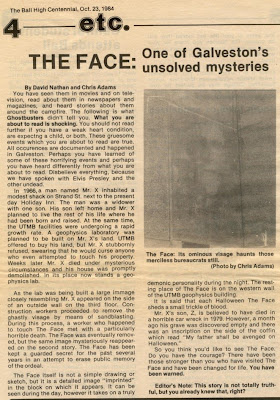 Click on it to make it bigger (that's what she said)

I'd snapped this great Herradura Restaurant neon sign before, but I just had to pull over as I entered Rosenberg to get it against the morning sky.

I couldn't leave Rosenberg without getting some pics of the old "colored" theater, the beautiful, Art Deco Cole Theater. Built in 1937, I'd taken some of it previously. A current musical obsession, The Ink Spots, performed here in 1948.

Fort Bend County Courthouse, c. 1909, Classical Revival/Beaux-Arts
Upon leaving Richmond, I did a double take as I drove past Larry's Original Mexican Restaurant. This type of thing fills me with so much joy I want to cry:

Jackpot!
About eight miles east of Richmond is the town of Sugar Land, best known locally (at least at one time) for the Imperial Sugar factory: 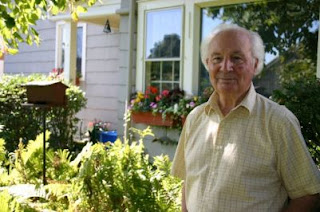 It saddened me to hear this past Sunday of the recent passing of Richard Gladwell. Gladwell was the host of a program played on NPR stations called With Heart and Voice. With Heart and Voice was "a weekly program of choral and organ music." I say "was," because I assume the show will be no more. I was encouraged required forced to go to Sunday school and attend church services until I graduated from high school. Consequently, I haven't been a regular church goer ever since. The closest I've come to being one again has been listening to With Heart and Voice every Sunday on my NPR station during my long, morning run (which I do, ironically, religiously). It has always reminded me of the great old Hook & Hastings pipe organ echoing throughout the church of my youth. Adieu, Richard Gladwell.

"Trumpet Tune in D," by David Johnson (the theme to With Heart and Voice):


According to the Wikipedia entry, the following images are in the public domain.

Having just finished David McCullough's book about Theodore Roosevelt, Mornings on Horseback, I now find myself sort of crushing on Alice Roosevelt (so look out, Blake Lively). Weird. 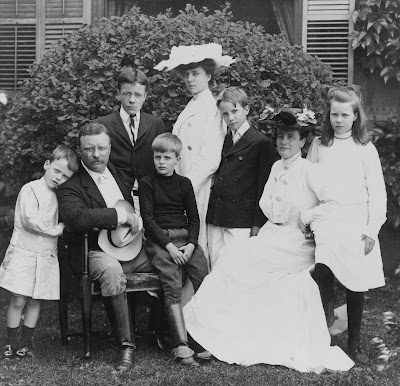 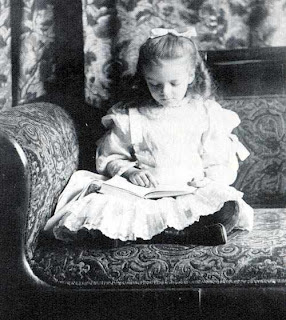 Alice in 1891
Alice was Theodore Roosevelt's first child, born in 1884, and only offspring with his first wife. She (TR's first wife) would die as a result of Bright's disease, in addition to childbirth complications. It also happened to be the same day (in the same house, on a different floor) TR's mother, Mittie, passed away. In his diary, TR would say about that day: "The light has gone out of my life." He would never speak of his first wife ever again, failing to so much as mention her name in his autobiography.

Alice would be sent away, to live with TR's older sister, Bamie, until he eventually remarried in 1886. And I got the impression from reading Mornings on Horseback, as well as Alice's premature (she wrote it in 1935, and would live until 1980) autobiography, Crowded Hours, and Mrs. L: Conversations With Alice Roosevelt Longworth, that although he loved her, Alice was for TR an unfortunate reminder of a profoundly painful life event. Consequently, the way I read it, he didn't show her much affection, and being as busy as he was, he most likely didn't give her as much attention as she craved. Consequently, Alice could be a bit of handful. This blurb from from the children's book, What to Do about Alice?: How Alice Roosevelt Broke the Rules, Charmed the World, and Drove Her Father Teddy Crazy!, is probably only slightly hyperbolic:

Theodore Roosevelt had a small problem. Her name was Alice. Alice Lee Roosevelt was hungry to go places, meet people, do things. Father called it running riot. Alice called it eating up the world. Whether she was entertaining important White House visitors with her pet snake or traveling the globe, Alice bucked convention and turned every new experience into an adventure! 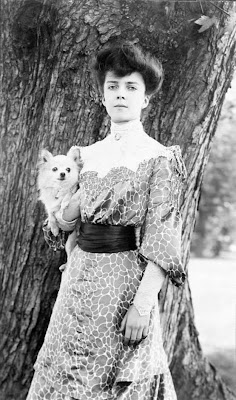 With her dog, Leo, in a 1902 White House photo
And according to Wikipedia:

When her father took office following the assassination of President William McKinley (an event that "filled (me) with an extreme rapture"), Alice became an instant celebrity and fashion icon. She was known as a rule-breaker in an era when women were under great pressure to conform. The American public noticed many of her exploits. She smoked cigarettes in public, rode in cars with men, stayed out late partying, kept a pet snake named Emily Spinach (Emily as in her spinster aunt and Spinach for its green color) in the White House, and was seen placing bets with a bookie.

Once, a White House visitor commented on Alice's frequent interruptions to the Oval Office, often because of her political advice. The exhausted President commented to his friend, author Owen Wister, after the third interruption to their conversation and after threatening to throw Alice 'out the window', "I can either run the country or I can attend to Alice, but I cannot possibly do both." 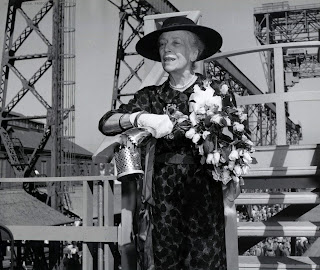 Alice (looking a bit more like her cousin, Eleanor) christening the sub named after her father, the USS Theodore Roosevelt in 1959

At the end of Theodore Roosevelt's presidency in 1909, she is alleged to have buried a voodoo doll of new First Lady Nellie Taft in the White House lawn. She was such a fixture of the Washington D.C. social circuit, living until 95-years-old, she was sometimes referred to "the other Washington Monument." 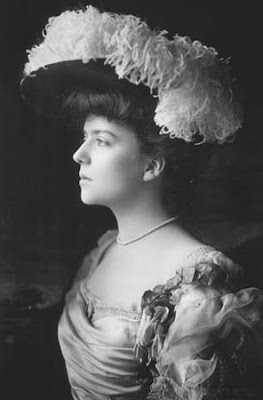 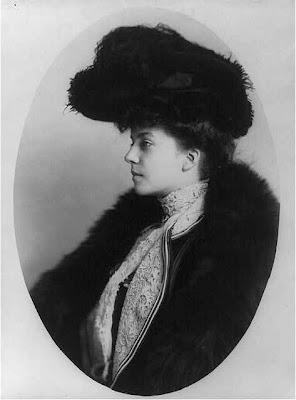 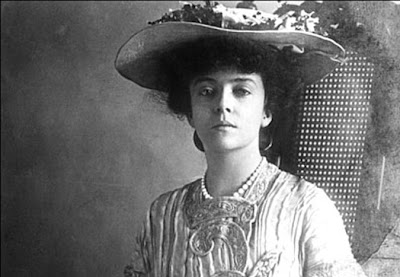 Picture from a 1906 postcard related to her wedding 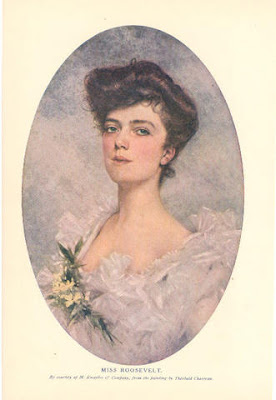 Formal portrait from 1901
Someone was inspired all these decades later to do a YouTube video about her, complete with poetry by Lord Byron:


This past Saturday, I took advantage of the first sunny day we've had here in well over a week to get some shots of two favorite Diedrich Rulfs masterpieces, the M.E. Rudisill House (1896) and the Roland Jones House (1895). Specifically, the morning sunlight really brought out the Queen Anne/Victorian detailing:

With busy North Street being just to the left in this picture, it was almost as if the 21st and 19th centuries were separated by merely the front yard of the Rudisill House.

One of the things I find admirable about Frank Sinatra's career was his willingness to try new things (sometimes hilariously so) in order to remain relevant in the fickle business of trying to sell a product to the popular music crowd. Whether it was agreeing to allow electric organ and bass on the Strangers in the Night album (1966) or his sublime recordings he made with Antonio Carlos Jobim (1967 and 1969),

Sinatra was surprisingly flexible when he needed to be. Such is the case when, in 1977 during the final days of his "Ol' Blue Eyes Is Back" phase, the crooner worked with a then 32-year-old producer/arranger named Joe Beck. Allegedly Don Costa suggested to Sinatra that he record some disco material. And the rest, as they say, is history. From Will Friedwald's Sinatra! The Song Is You: A Singer's Art:

In the '60s and '70s, when he tried to reach the youth market, he stooped to their level by dabbling in ephemeral forms that were well beneath his taste and talent. His mercifully brief dalliance in "disco," as it used to be called, represents by far the most execrable example of this trend.

On February 16, 1977, he and Joe Beck recorded vocal tracks on "Night and Day" and "All or Nothing at Al" on top of disco orchestral backings that the producer-arranger had laid down the day before. While "All or Nothing at All" was wisely withheld (released only in 1995 on The Complete Reprise Recordings suitcase), "Night and Day" made it out as a single. (Sinatra also performed this version live, even as late as March 1979.)

I can see why they held back on releasing the Issac Hayes-inflected version "All or Nothing at All", yet I kind of like the update of "Night and Day." Of course, "Night and Day" is a tune Sinatra had sung since the earliest parts of his career.

There's the 1947 version he recorded during his late Columbia Records period, which Columbia Records didn't initially release, and apparently sat undocumented in Columbia's vaults until 1993:

Applying the "I've Got You Under My Skin" template to it on the 1957 A Swingin' Affair! album:

My personal favorite, a jazzy, vibe-heavy live recording, captured on Frank Sinatra with the Red Norvo Quintet: Live in Australia, 1959, not released until 1997:

Back to the heavy strings and melodrama on the Don Costa arranged version from Sinatra and Strings (1962):

And finally, disco Frank on the February 1977 recording with Joe Beck:

OMFG
Posted by Chris at 7:22 AM No comments:

Ah! Well a-day! What evil looks
Had I from old and young!
Instead of the cross, the albatross
About my neck was hung.

from "The Rime of the Ancient Mariner" by Samuel Taylor Coleridge 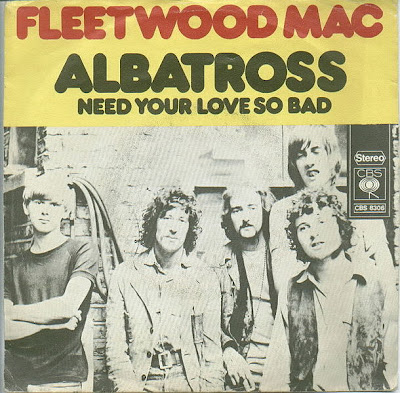 It would appear Mick Fleetwood needs your love so bad.
From Wikipedia:

"Albatross" is a guitar-based instrumental by Fleetwood Mac, released as a single in 1969, later featuring on the compilation albums The Pious Bird of Good Omen and English Rose. The piece was composed by Peter Green.

The composition suggests a relaxing sea setting, with cymbals imitating the sound of waves and a dreamy solo from Green's guitar. It contains only two chords, Emaj7 and F#m, and could be seen as an early ambient work. It is often assumed that Green used his Les Paul but he said it was his Fender Stratocaster, as there is subtle use of the vibrato bar. The Les Paul that Green used in Fleetwood Mac has a nasal tone like that achieved in the in-between positions of a Stratocaster, and heard in the song. 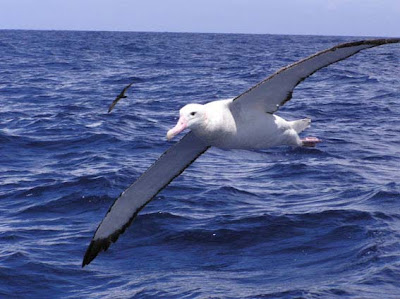 "Deep in a Dream" 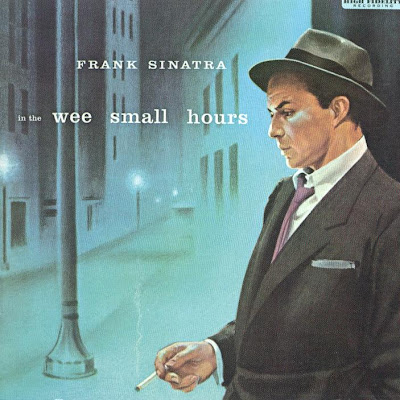 From Sinatra's 1955 masterpiece (and possibly the first "concept album"), In the Wee Small Hours, here is "Deep in a Dream" (by Eddie DeLange and Jimmy Van Heusen). "They" don't make 'em like this anymore: 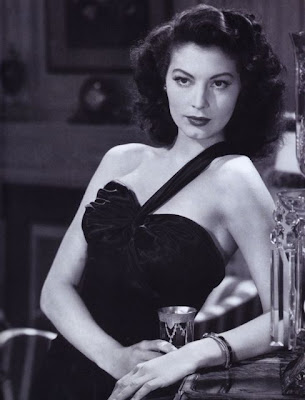