In October 1977, National Lampoon devoted an entire issue to The Beatles. Chris Miller wrote a hilarious piece titled "Beat the Meatles." It gets a bit crude in places, but the "interview" reveals much about the greatest rock band of all time. The writer captured perfectly the image people had in their minds of the Fab Four, prior to John Lennon's murder. Return now to the days when a reunion was unlikely, but possible. 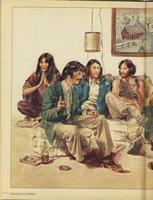 I remember that. I was graduating high school that year. That's as funny as that Chinese menu in the NatLamp mag. Does anybody know where to find that?

If you found this magazine in a house on King Street, it must be mine. I last remember reading this while eating a triple meat Roy's burger in 1977. That was my Senior, Senior year at SFA.

I think I ordered it as a back issue from National Lampoon. Great sensory memory. Isn't it strange, the things you remember?

Thanks for posting this - it's exactly as I remember it!

This was a pretty insightful article, spiced with Millers humor. Good to see folks discovering this anew or finding it again.

The Chinese menu was probably in the Food and Festivity issue, December 1978. If I remember correctly it was one of the first if not the first issue I got by subscription (when I was 12 years old, what were my parents thinking?)..