"I've Got a Gal in Kalamazoo" 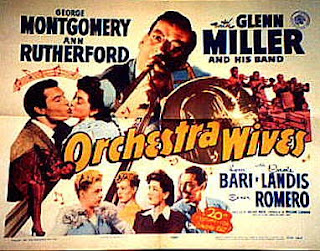 "I've Got a Gal in Kalamazoo" was written for the 1942 film Orchestra Wives by Harry Warren and Mack Gordon. Big band leader Glenn Miller and his orchestra play it during a scene set at the Glen Island Casino. The vocals are handled by saxophonist Tex Beneke and the Modernaires. Also appearing in this musical scene are Cesar Romero, playing a pianist, and Jackie Gleason, in an uncredited roll as Ben Beck the bass player.

The Jefferson Carnegie Library - this 1907 building is one of only five Carnegie Libraries serving its original function in Texas. I know of another one in Bryan. 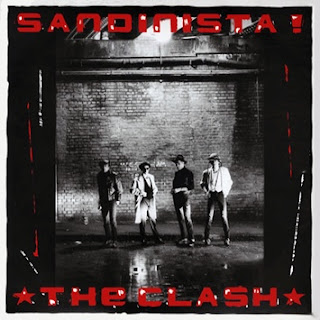 From side four (out of six) of The Clash's White Album, Sandinsita!, this is "The Call Up":

If London Calling was the Clash’s masterpiece, Sandinista! - a three-LP, multi-genre assault on the senses (and the follow-up to London Calling) - was its stoned out red-headed stepchild. Thirty-six songs strong, Sandinista! was their chance to completely let loose and record whatever it is they felt like recording.

Read Rolling Stone's original review of Sandinista! - back in the day, before they'd put lame-os like Maroon 5 (ha!) on the cover.
Posted by Chris at 8:15 PM No comments: 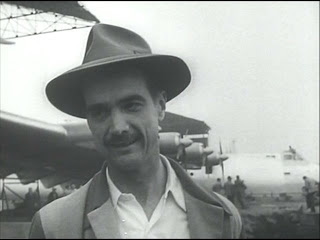 Although the actual footage is of the November 2, 1947, Hughes-piloted, one time only flight of the "Spruce Goose," this newsreel is from 1962. It seems to me it's about how the government hoped to recoup the $18 million it sunk into the project. 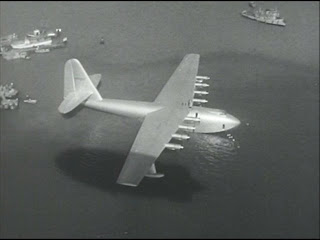 The Hughes H-4 Hercules is a one-off heavy transport aircraft designed and built by the Hughes Aircraft company, making its first and only flight in 1947. Built from wood due to wartime restrictions, it was nicknamed the "Spruce Goose" by its critics, who accused Howard Hughes of misusing government funding to build the aircraft. The Hercules is the largest flying boat ever built, and has the largest wingspan and height of any aircraft in history. It survives, in good condition, at the Evergreen Aviation Museum. 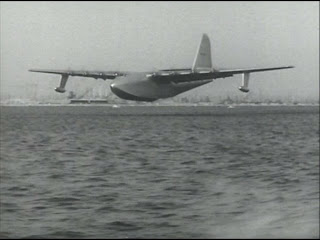 
The "other Italian" performs "I've Got My Love to Keep Me Warm" from Ring-A-Ding-Ding! at a place in the sun (the Sands). 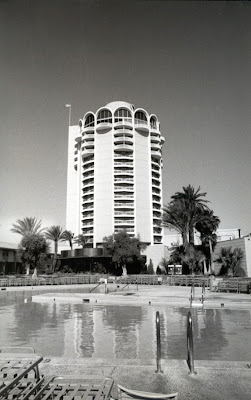 
This was a nice song with a majestic pop music guitar solo by Warren Cuccurullo. In hindsite, I suppose it's an anthem for my generation (like it , or not), that grew up in the '80s (sort of paralleling the career of Duran Duran), and came of age in the early '90s. I don't remember thinking that at the time (in 1992-93) though. 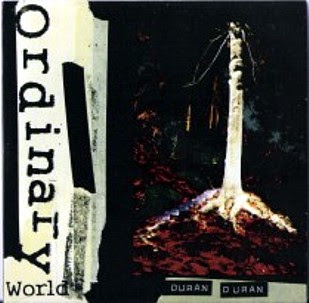 "Ordinary World" is the 23rd single by Duran Duran, and the first single from The Wedding Album. It was released in December 1992 in the United States and January 1993 in the United Kingdom, reaching the top ten in both countries. 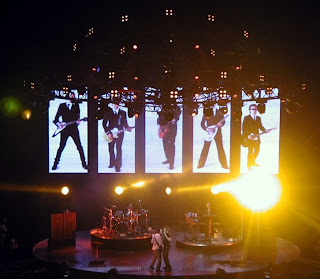 A reunited Duran Duran performing "Ordinary World" in April 2005. (picture from gear-review.co.uk)
Posted by Chris at 9:34 AM No comments:

Llano nearly became a steel town when huge iron deposits were found. The boom didn't last long, after someone noticed there was no coal for smelting. Many streets in Llano have names that date from those optimistic times.

Marble and granite production partially made up for the steel mills that never materialized. Marble and granite was shipped all over the U.S. until the railroad went up on their rates. Llano County today continues to be trucked away daily by the ton. A proposed railroad link to Fredericksburg never made it off the drawing board, but there's little doubt it would've been a boon to the economy of both towns.

The Old Southern Hotel Building - built in 1880, an annex and other additions were added around 1883, renamed the Colonial Inn, and closed in the 1950s. The additions were removed in 1977 (info. from the Texas Historical Commission plaque).

Llano County Courthouse was built in 1893. This is Llano County's fourth courthouse. A fire on January 22, 1892, destroyed the previous one. It's known for its unusually off-center tower.

The Confederate statue near the courthouse is evidence of the fact that Llano had a very high percentage of votes for succession.

The plaque says it was built in 1919, using an "Alamotif," or Mission Revival style.

Son of the Pink Panther 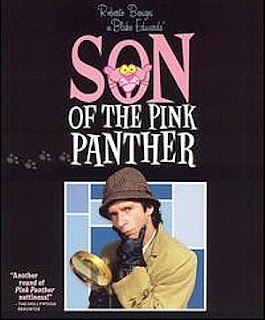 I wasn't aware of this at the time, but the French nearly squelched Middle Eastern terrorism almost fifteen years ago (by sending Clouseau's son, not the film...although that might have done it too).

This was the first Pink Panther film in a decade, following two unsuccessful attempts to continue the series following the death of Peter Sellers, who originated the character of Clouseau. Considered a relaunch of the series, the plan was for Benigni - a popular Italian comedian who had yet to be discovered in America - to continue on where Sellers had left off. However, Son of the Pink Panther failed to generate critical or commercial success, the loss of Sellers proving once again to be too great. Benigni was not Edwards' first choice for the role. Kevin Kline, Rowan Atkinson, Gerard Depardieu, and Tim Curry were all considered before Benigni won the role. This would be both the last Panther film to be directed by Blake Edwards, and Edwards' final film to date.
Posted by Chris at 6:33 PM No comments: 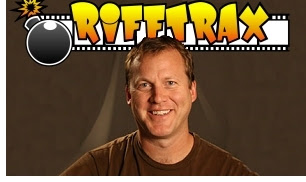 Via an ad at Something Awful, I just discovered a site called RiffTrax. It's an endeavor by Mike Nelson from MST3K which essentially carries on the MST3K tradition:

At RiffTrax.com, you can download Mike's feature-length commentaries and listen to these "RiffTrax" in sync with your favorite, and not so favorite DVDs. It's like watching a movie with your funniest friend. And it's super easy to do! Just play the DVD and RiffTrax MP3 together and Voila! The Matrix, Star Wars and others just got way funnier!

Basically, a person would download an MP3 for $2.99 (worth it to me), rent or buy the movie (unless they own it, obviously), sync the two, and enjoy an awful film get what it deserves. I just downloaded Star Wars Episode I: The Phantom Menace and Star Wars Episode II: The Attack of the Clones, and the parts I've listened to are pretty funny. The syncing process is way easier than coupling The Wizard of Oz with Dark Side of the Moon. The syncing process is a bit of an issue, but not too much to the point of ruining the overall experience.

Glitter
Anyone who wondered what Mike and the Bots from MST3K would do to a film like, say, Glitter, or Fantastic Four, need no longer live in ignorance. Scanning over the many selections, it would appear as if most of the MST3K cast is involved, particularly Kevin Murphy, the voice of Tom Servo(!). They even get a little help from Chad Vader on Attack of the Clones:

Email ThisBlogThis!Share to TwitterShare to FacebookShare to Pinterest
Labels: MST3K

"The Way You Look Tonight" 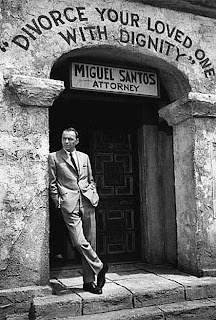 Apart from "Wave," my other favorite Sinatra recording would have to be "The Way You Look Tonight," which he did for the Frank Sinatra Sings Days of Wine and Roses, Moon River and Other Academy Award Winners album in 1964. The vocal on it is one of the best examples of the more swinging, jazzy style indicative of his 1960s Reprise Records period. One way to describe it is Sinatra would sing just ahead of or slightly behind the beat. Comedian Tim Conway described Sinatra's style by using "Row, Row, Row, Your Boat" as an example. Whereas most people would simply sing "row, row, row, your boat...," Sinatra would do "row, (pause) row, row your boat," or some variation of that. 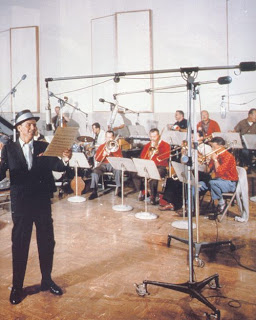 Sinatra took this technique to its extreme on "The Way You Look Tonight," leaving out entire words, such as on the last verse, wherein instead of "Yes you're lovely," he simply sings "Love-ly." A jazz trumpeter named Zeke Zarchy said: "Once while I was driving I heard an old record by Frank and Nelson (Nelson Riddle), and I had to get out of the car and call the radio station...It was 'The Way You Look Tonight,' the greatest thing I ever heard! I defy any instrumentalist to swing like he does with his voice on that record." (p. 20 of Sinatra! the Song is You: A Singer's Art by Will Friedwald). No matter how he did it, no one else before or since could make a smile seem so warm or a cheek so soft.

by bridgebolt
Sinatra's first chance to record "The Way You Look Tonight" was as a ballad on a V-Disc recording from a Songs by Sinatra (his 1940s radio program) dress rehearsal in November 1943. The song was introduced to my generation in this beer commercial from 1986:


The commercial apparently caused a resurgence in the song's popularity. One of the results was many letters from fans asking Sinatra to perform it in concert. Also, people were said to have requested it from the audience at his live shows. Sinatra added it to his rehearsal schedule, but he never performed it live.

"The Way You Look Tonight" is a song featured in the film Swing Time, which won the Academy Award for Best Original Song in 1936. It was written by Jerome Kern with lyrics by Dorothy Fields. Fields later remarked that the melody, upon first hearing it, moved her to tears and she was thrilled to provide the lyrics: "The first time Jerry played that melody for me I had to leave the room because I started to cry. The release absolutely killed me. I couldn't stop, it was so beautiful." 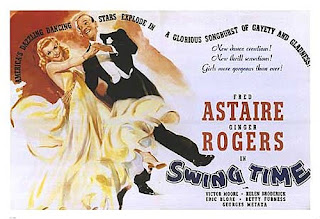 The song was sung by John "Lucky" Garnett (played by Fred Astaire) while sitting at the piano. Penelope "Penny" Carroll (played by Ginger Rogers) was busy washing her hair in an adjacent room, and feeling anything but beautiful at the time.

Yeah, Sinatra made it swing (with Nelson Riddle's assistance!).
Posted by Chris at 6:51 PM 2 comments:

According to this site:

Linden is blessed with a rich cultural and music heritage. Musicians that call Linden home include: Scott Joplin – founder of Ragtime Jazz; Aaron “T-Bone” Walker – Daddy of the Blues, Don Henley – Rock & Roll great, co-founder of the Eagles, and nationally honored preservationist, and Richard Bowden – America’s most famous unknown entertainer. Linden’s Music City Texas Theater draws audiences from the Atlantic shores to the Pacific. Musicians from all genres can be seen walking the streets of this small town.

Cass County Courthouse (c. 1861, Classical Revival style) - Cass County has only had one courthouse - the original one built prior to the Civil War. It was remodeled in 1900 and 1933.