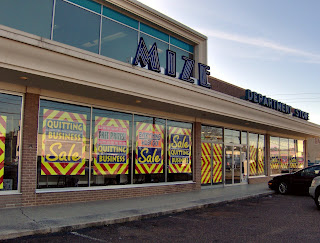 Lufkin/Nacogdoches visitors to EBIN might have an interest in this. It makes me heartsick. First Shaw's, and now, via The Daily Sentinel, local residents have learned we will lose the Mize Department Store:

"Mize demise: After more than 80 years, icon is closing"

By KYLE PEVETO
The Daily Sentinel

Mize Department Store, a company associated with Nacogdoches since 1925, announced this week it will soon close.

Across the windows of the store's Hospital Street location, large red-and-yellow signs announced that the store would have a quitting business sale. Behind these bright yellow signs, in a display, a small wooden sign from a different time peeked out, and it read: Get Wise Trade at Mize Brothers.

"It's something we worked hard for, and it's sad to see it go," said Jack Mathews, former co-owner of the store.

Mathews was a partner for 40 years and retired a little more than five years ago. He learned a few days ago that the store would close, and said he was heartbroken. 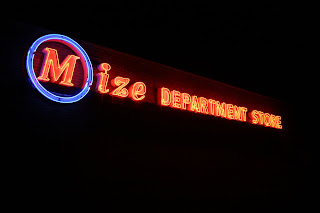 "We wanted to keep it independent and keep it going for the town and for our customers," he said. "It's good for the town, and Nacogdoches and East Texas have been good for the store, too."

The store, which sells high-end clothing and shoes, is located at the corner of North and Hospital streets. Once, every small town had a store like Mize, and larger cities had several. But along with the growth of nationwide department stores anchored to strip centers and shopping malls, many began to disappear. 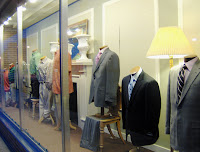 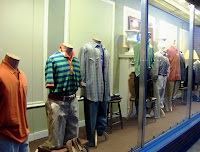 Donna Maisel, retail director of the Nacogdoches Economic Development Corporation, said it was disappointing for the community to lose Mize. 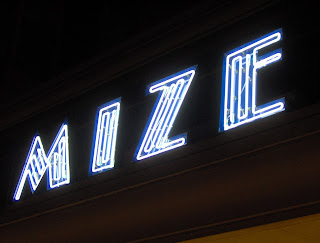 Longtime residents of Nacogdoches have expressed disappointment in seeing Mize prepare to close.

"It's a part of old Nacogdoches — downtown Nacogdoches. It's been there so long," said Charles Bright, 79, owner of Bright Coop.

"They made you feel like you're important, and they appreciated you coming in," he said. "They were more prone to give you service, and you didn't mind asking them for favors." 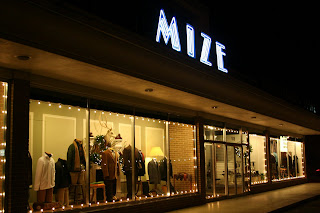 The Mize Brothers store originally opened in 1925 downtown on Main Street just west of the old opera house. B.H. Mize and his brother, W.A. Mize, started the business there, selling whatever customers suggested. When patrons didn't come to them, they went into the community to peddle their merchandise.

Eventually the Mize brothers split the business, and W.A. Mize operated the Mize Dress Factory on North Street. B.H. Mize kept the retail store and made a longtime employee, L.D. Pate, a partner in the business. His daughter, Anita Standridge, still owns a part of the Mize store, and Mike Bay is another owner. 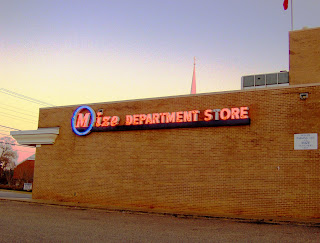 Goodbye, Mize! You will be missed!! 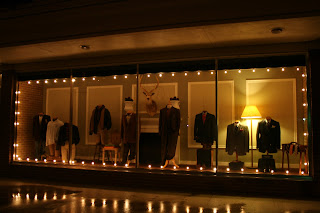 I can't believe that reporter made it all the way through the article without saying "Walmart". Guess the paper needs Walmart's ad money.

I nearly titled the post "Wal-Mart 3, Nacogdoches 0" to reflect how this is the third downtown business to shut down in one year. But I don't think Wal-Mart alone can be blamed. Online shopping has caused just as much "harm."

As much as I hate the Giant Store Which Shall Not Be Named, I don't think it can be blamed in this case. You don't shop at Wal-Mart for a tailored suit, and you don't shop at Mize for NASCAR T-shirts. The reporter did a good job. And, yes, I work for the paper. Tonight, the reporter also hipped me to Jeff Tweedy's new solo album, which I highly recommend.

Good point, kendal. Is Tweedy the guy from Wilco?

Oh man, this is lame. I still have a shirt I bought from Mize, as well as remember the girl who's parents used to run it back in my high school days. I haven't been in Nac for years..it seems like alot of things have changed.

Wal-Mart was never the direct competition for Mize. It was stores like Belk and a couple of others similar to those in Lufkin and surrounding areas that were the downfall of Mize. My mother is Anita Standridge, patner at Mize Department store for over 30 years, and daughter of LD Pate who was partners with Mr. Mize himself since the 40's. What did Mize in is a culmination of one of the other partner's slow constant sapping of funds over the course of many many years, the economy's continual downturn, and corporate competition. *such as Belk, to compare Mize to Wal-Mart is to compare Boardwalk with Mediterranean Avenue in Monopoly*

Mize was an institution in Nacogdoches for almost 90 years. Mr. Mize pulled my grandfather in as partner, and the store really took off. Michael Bay, and my mother Anita did everything within their power to keep the store from going under. That having been said, there's only so much of your own money you can put into a business before it's no longer feasible to keep it.

I had recently moved out of state when my mother called to tell me they were closing the doors. It was all I could do to not quit my job and head down to try to help. It was a very important facet of our family.

Still hurts when I find a little tidbit like this.