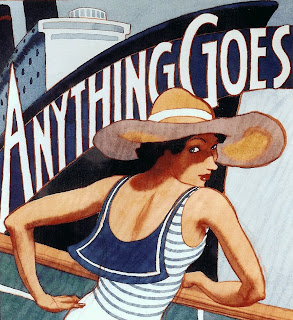 From the Wikipedia page:

"You're the Top" is a Cole Porter song from the 1934 musical Anything Goes. It is about a man and a woman who take turns complimenting each other.

It was the most popular song from Anything Goes at the start with hundreds of parodies.

The lyrics are particularly significant because they offer a snapshot as to what was highly prized in the mid-1930s, and demonstrate Porter's rhyming ability. 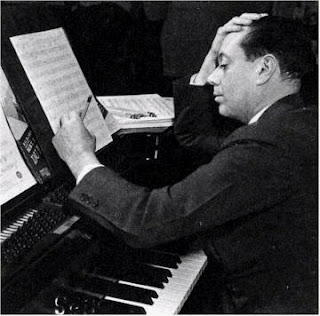 Porter's own 1934 recording of it was just recently added to the United States National Recording Registry. 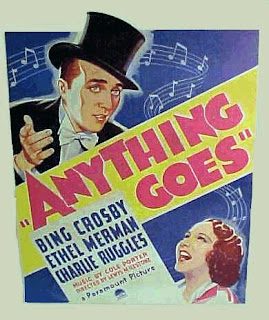 Here are Bing Crosby and the 28-year-old Ethel Merman singing "You're the Top" in the 1936 film version (also know as Tops Is the Limit: 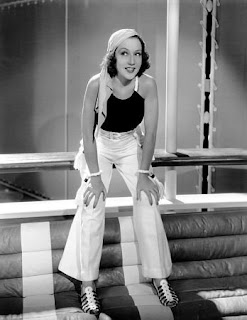 Time was not kind to her. She was sort of cute back in the day. Same nutty voice and crazy eyes, but not bad! Kind of a Christina Aguilera thing going on there. And, oh yeah, we're drinking it up in the post-Prohibition-era world aboard a luxury liner on a long ocean voyage, so anything goes!

From the 1946 Porter biopic Night and Day, here are Cary Grant and Texan Ginny Simms (San Antonio) doing their take on "You're the Top." Cary Grant is surprisingly good. While I could never believe he is Cole Porter, I can believe he is playing that piano. I think this has been colorized:


The song was also covered by Barbra Streisand for the 1972 film What's Up, Doc?:

Return to the City of Stars


Kilgore - the City of Stars. It's so easy to imagine what the East Texas oil boom was like when walking its wide, downtown streets. A final, last holiday weekend of the Holiday Season post, in Kilgore no less (taken Friday, December 28, as the sun was beginning to go down):

"Eyesight to the Blind" 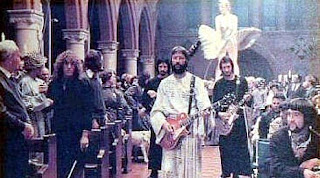 Eric Clapton, Pete Townshend and John Entwistle lip sync to their recording of "Eyesight to the Blind" in Tommy (1975):


This song ("Eyesight to the Blind") was originally written by Sonny Boy Williamson (the second artist to record under that name) and was released in February 1951. Pete picked up the song from Mose Allison's 1959 cover version. Early drafts of "Tommy" also included Mose's "Young Man Blues" and "One Room Country Shack." In most early song lists, this song came immediately before "The Acid Queen." A version with an alternate vocal surfaced in the U.K. in 1972 and was included on the Mobile Fidelity Sound Labs CD (from thewho.net). 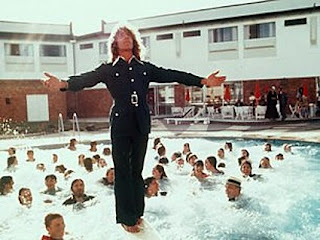 The movie Tommy (1975) was one of those movies (along with Blazing Saddles (1974), Jaws (1975), The Towering Inferno (1974), Earthquake (1974), and Phantom of the Paradise (1974), etc.) that I would have seen for the first time after my family finally got HBO in the late '70s. Those movies were really the first R-rated type ones I'd really ever seen (I would have been 11 or 12), so they each made big impressions (good and bad). Many of those movies were disturbing to me and showed up somehow in a nightmare or bad dream. Tommy was such a film. 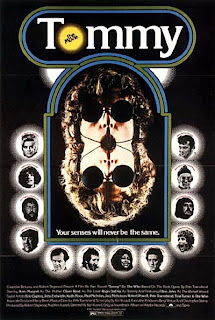 And is it just me, or does Clapton's "Forever Man" sound just a tad bit like "Eyesight to the Blind"?

Peter Bell was a colonel in the Civil War, a Mexican War Veteran, and before that, a San Jacinto Veteran. He was a Texas Ranger, a Congressional Representative and a Governor.

Sinatra's The House I Live In added to film registry


The National Film Registry has added 25 more classic films to the national registry. The films are chosen because they are culturally, historically or aesthetically significant. Perhaps most importantly, the films listed in the national registry are almost certain to be preserved. Among the 25 new films is the 1945 Sinatra film The House I Live In. If his support of Ronald Reagan was Sinatra at his most conservative, The House I Live In was certainly his most liberal. Here's a repost of a post I did about the film: 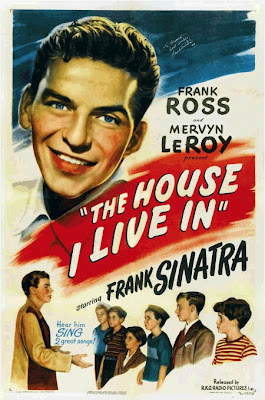 The House I Live In (1945) was a short film written by Albert Maltz and starring Frank Sinatra. It was made to oppose anti-Semitism and prejudice at the end of World War II.

Albert Maltz
Maltz was one of the The Hollywood Ten, a group of screenwriters, actors, directors, musicians, and other U.S. entertainment professionals who were denied employment by Hollywood movie studios in the 1940s and '50s due to their political beliefs or associations, real or suspected. 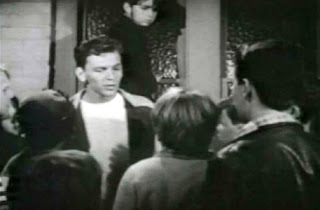 Here is the complete film (all ten minutes of it). See and hear Frankie, in full, Columbia-era bloom, performing the title tune and "If You Are But a Dream" (lovely!). The bald gentleman with the pipe at the beginning is Axel Stordahl, Sinatra's arranger and conductor during his Columbia years:

No Country for Old Men 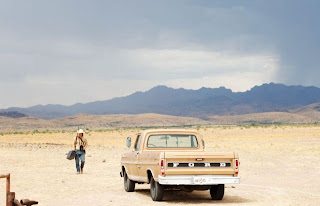 Here is the Charlie Rose show on which he discussed No Country for Old Men with Joel and Ethan Coen, Javier Bardem, and Josh Brolin. I've seen it twice in the theaters, and I think it's a damn fine film. There are moments of pure suspense - the type Alfred Hitchcock used to do (think of the scene in Rear Window when Jimmy Stewart watches as Grace Kelly is being attacked by Raymond Burr). The video: 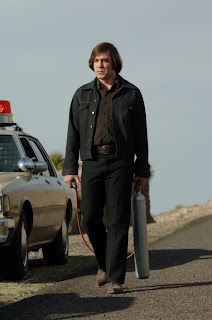 It's odd how the official movie site and the trailer both use music, yet there wasn't a bit of it in the actual film. I expected there would be a soundtrack similar to something like the one used in Fargo (1996). Music is generally such a big part of many Coen films, like Raising Arizona (1987) or The Big Lebowski (1998). But other than during a couple of the most intense moments of suspense, there is absolutely no musical soundtrack. In fact, I wouldn't describe what was used as "music" as much as I would categorize it as "ambient sound." It's one of the things which makes it such a unique film experience. 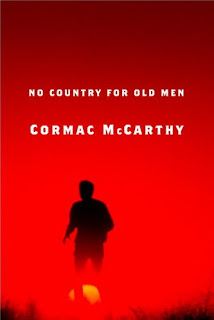 Still, I had questions about the plot, so I'm reading the novel by Cormac McCarthy. I find McCarthy's not using quotation marks during character dialog to be extremely annoying. And isn't that I'm not up to the challenge of deciphering when the character's are speaking or not - I made it through (and understood) Faulkner's The Sound and the Fury and Absalom, Absalom!. I had planned to delve into McCarthy's novels, but I'm afraid he's lost me with that style. It just seems so unnecessary of a thing for him to do.
Posted by Chris at 12:54 PM No comments:

Email ThisBlogThis!Share to TwitterShare to FacebookShare to Pinterest
Labels: books, movies, No Country for Old Men 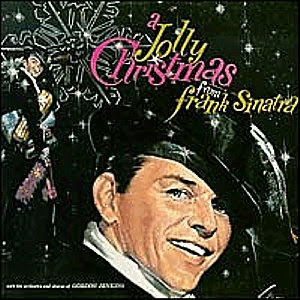 "Mistletoe and Holly" was written by Frank Sinatra and cronies Hank Sanicola (with whom Sinatra wrote the beautiful "This Love of Mine") and Doc Stanford. It was recorded for the 1957 album A Jolly Christmas with Frank Sinatra. Here it is used as the opening number for the 1957 Christmas special of "The Frank Sinatra Show":

"Well, Merry Christmas ladies and gentlemen, and welcome to our Christmas show, from Bulova, the gift of a lifetime, and Chesterfield, my cigarette." - Frank Sinatra

"Iowa City in the Snow"


Here's a nice one today from Shorpy Historical Photographs: 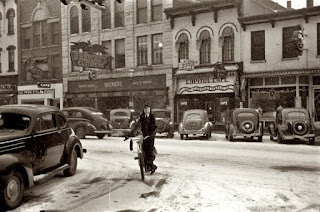 February 1940. The main street in Iowa City during a snowstorm. Businesses in this view include Bremer's, the Capitol Cafe and Princess No. 2. 35mm nitrate negative by Arthur Rothstein for the Farm Security Administration. (Shorpy caption)

Be sure to go there to see the full size version!
Posted by Chris at 8:28 PM No comments: 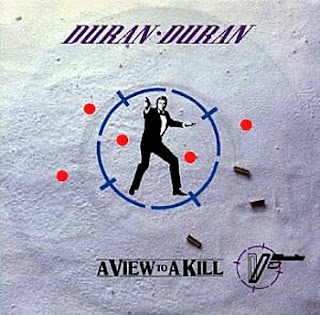 From the A View to a Kill Wikipedia entry:

The theme song "A View to a Kill", was written by John Barry and Duran Duran, and performed by the band. It has three different versions of which the two made by Duran Duran make no reference to the James Bond theme. "A View To A Kill" was second in the British charts and first in the American charts, thus becoming the peak song in the James Bond series. 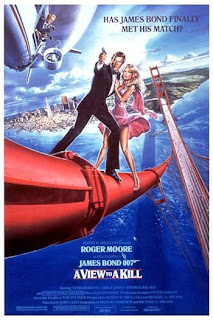 I'll always associate this song with the euphoric final months of my senior year in high school, so, good times. It was constantly played on the radio, and the video was in heavy rotation on something we called "Music Television," MTV for short. Because Duran Duran had an international, cosmopolitan image at the time (no doubt due to the exotic locations used in their music videos), the pairing (James Bond/Duran Duran) made perfect sense. "A View to a Kill" was the first thing the group worked on after splintering into the groups Arcadia and the Power Station in 1985. Apparently the Power Station sound was what they felt was best for their Bond theme, because Bernard Edwards produced it. It seems that the "reunification" wasn't entirely smooth, according to the Duran Duran Wikipedia entry:

Duran Duran were never the same after this break. According to Rhodes, the two side projects "were commercial suicide... But we’ve always been good at that." The band was still off balance when they regrouped to contribute "A View to a Kill" to the 1985 James Bond movie of the same name. This single remains the only Bond theme to go to Number 1 on the U.S. charts, and the highest-placed Bond theme on the UK chart where it reached Number 2. It was the last single the band recorded as the original five-piece for twenty years.

Le Bon, Simon Le Bon
Duran Duran performed in front of 90,000 people at Live Aid (in Philadelphia) on July 13, 1985, while "A View to a Kill" was #1 on the American charts. The original five did not play live together again until July 2003. The Live Aid performance is where Simon Le Bon's voice cracked (an unintentional falsetto note) during the final chorus of "A View to a Kill," which he later described as the most humiliating moment of his career. I think he made much too big of a deal out of it. True, it's pretty bad, but at least he was actually singing live, unlike so many "performers" today:


Here is "Battlefield," a black and white Christmas Seals short featuring Frank Sinatra and a young Jerry Mathers. This spot ran in movie theaters in the 1950s. It depicts Sinatra bringing comfort to Beaver in bed: 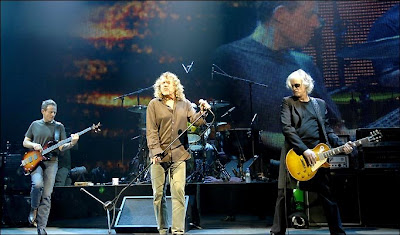 Getty Images
Let's see how long this video is up! Here is Zeppelin performing "Kashmir" at the O2 Arena, London, on Monday, Dec. 10. "Kashmir" is the song most Led Zeppelin fans said they wanted to hear in a music magazine poll. This performance of it left Robert Plant in tears (according to this review). Has there ever been a more majestic rock song?? I don't think so.

UPDATE: It was yanked later the day I posted this (12/12/07), and was soon replaced. It's been back up since then:
In the likely event that video is removed, and it's uploader executed, here's a live performance from 1979 (with John Bonham):