In memory of cheesemaster Mitch Miller, this repost: 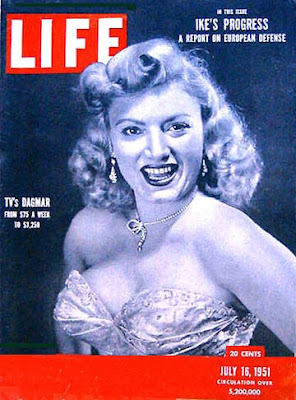 Must have been a slow news month.
Wikipedia entry:

"Mama Will Bark" is a novelty song written by Dick Manning and performed as a duet between Frank Sinatra and Dagmar in 1951. The song was recorded at the behest of Columbia Records A&R head Mitch Miller, who had been intrigued by the comic chemistry he perceived between Sinatra and Dagmar during her appearances on Sinatra's CBS television program, The Frank Sinatra Show. 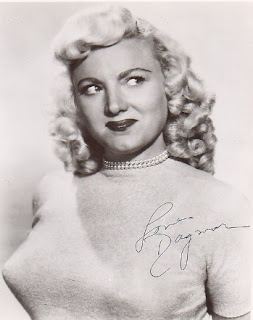 Dagmar's talents on full display
The recording, which features off-key singing by Dagmar and sound effects of dogs barking, is commonly cited as an emblematic low point in Sinatra's troubled later years at Columbia. Sinatra himself later said of the song: "The only good it did me was with the dogs." Nonetheless, the single (which did not receive an album release) was a hit, nearly reaching the Top 20 on the Billboard singles chart.


The B-side to this May 10, 1951, crime against humanity? The Ava Gardner-inspired classic, "I'm a Fool to Want You" (the birth of Sinatra Career Phase II, in my humble onion).
Posted by Chris at 7:05 AM

Damn, that was painful. But it does prove that even the King of Cool could stumble.

Oh, he'd been down for a while at that point. Mitch Miller (and Ava Gardner in her own, special way) helped to keep him down.

The song's refrain is horrific - makes "My Humps" sound like Vivaldi.

...and here I thought Frank could sing his grocery list and turn it to gold.

God I have to agree - one of the worst songs I've heard ever. Horrible. I really thought that Dagmar just had to know she sounded flat as a pancake. I couldn't make it through the whole song. You can't sing that badly and not be unaware (although American Idol proves me wrong on that every season). She WAS a comedian, so.....maybe it all was a joke...

Gilligan, Mitch Miller would have been quite happy producing the Black Eyed Peas/Fergie. He was a schlockmeister, extraordinaire. But that crap sold -- the bottom line, even for Frankie.

I agree, Amy -- she had to be doing it all, tongue in cheek. She was supposed to be a Mae West type. But knowing that doesn't help every time she says "Mama will spank," and I cringe...