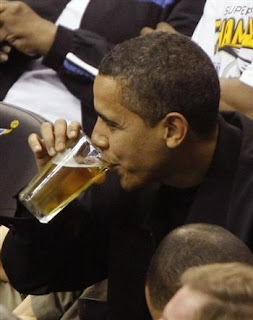 President Barack Obama takes a sip of his drink as he attends the Washington Wizards NBA basketball game against the Chicago Bulls at the Verizon Center in Washington, Friday, Feb. 27, 2009. (AP Photo/Gerald Herbert) - AP

It's cool that President Obama was able to mollify his Basketball Jones and briefly attend Friday night’s Bulls-Washington Wizards game (the first pro basketball game of the season) at the Verizon Center in D.C. It's significant he thought or made time to do it. He probably won't be able to do stuff like this for too much longer. What's scary is word of the plans for the President to make an appearance at the game began to get out while Obama was greeting the Chicago Bulls in the White House. The New York Times described it as "the worst-kept secret in Washington." He looks like he's really wound up, but having a good time. May be his last time for a while he can be something even close to resembling a "regular guy." What must it be like to be him right now?!? How many times can I use "be" in a sentence???
Posted by Chris at 7:23 AM

Sure, relax, kick back, enjoy. You've only signed on to 2 trillion dollars in debt, kicked the abortion killing machine back into overdrive, and shattered the stock market, in gee, only 30+ days. This man is disaster and I'm sad you gave him any coverage on your wonderful blog.

And he rocks White House parties too. The host with the most! http://www.breitbart.com/article.php?id=D96M09BO0&show_article=1

The rest of us proletariat can watch the stock market and our futures continue to tank. *sigh*

How about some more TX art deco to cheer us up? ;)

Remember though, he inherited that debt......Although this is the truth, I don't recall NPR (the place where they are really quick to remind listeners of this reality) ever using that term with W (although he "inherited" a debt when he became president too).

Amy, I'm doing a big photo trip at the end of the week (back to Dallas, again). I should have some good stuff, but perhaps not Deco. My next trip to Houston (which should be in the next couple of weeks), there are several things I have left to get. Until then, just think about how much fun our President is having!! No? Oh well...

Can't wait for the returns on your Dallas (and Houston) trip(s). Deco not required; ghost signs and/or early-mid 20th c. are great. All of your work is lovely. :)

Thank you for that, Amy. I appreciate feedback!