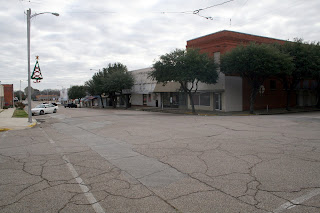 A popular local joke recalls two individuals (commonly Aggies) passing through town, arguing over the correct pronunciation of the city (one arguing for "muh-hay-uh" – the proper pronunciation; the other insisting on "mex-ee-uh" – the incorrect one). They stop in at a local eating establishment to settle the matter, asking, "how do you pronounce the name of this place?" The proprietor (waitress is also used in some versions) responds, "Deh-ree Kween." (from TexasEscapes.com)

115 miles W of Nacogdoches, 43 miles E of Waco, Mexia, Texas is named for a Mexican general, José Antonio Mexía, who joined an unsuccessful uprising against Santa Anna and died before a firing squad. A gas discovery in 1912 and an oil gusher in 1921 made it a boom town. From just 3,482 people the population exploded to an estimated 35,000 in 1922. It became so rowdy that martial law was imposed. 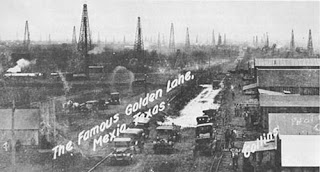 After the initial boom, the population decreased to a more manageable 10,000 by the mid-20s, but the onset of the Great Depression forced people to leave Mexia to find greener pastures. The population stabilized around 6,500 in the early 1930s, but the number of businesses reported fell by one third. A German Prisoner of War Camp was built in Mexia in 1942. The population was given as 6,618 in the early 1950s, not far from today's figure of just under 7,000. (History from TexasEscapes.com and The Roads of Texas) 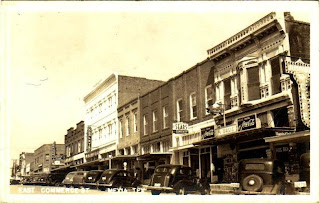 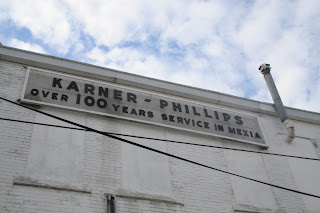 Quite frankly, Mexia seemed pretty rundown. There was a fairly clear demarcation line separating what was left of the old downtown, and the virtual ghetto just a block away. I turned a couple of corners (on foot) I wasn't sure I should have taken. 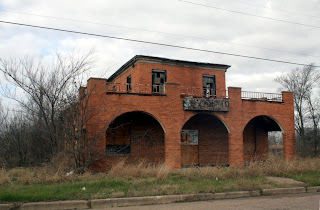 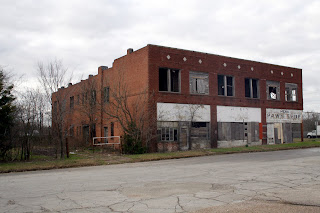 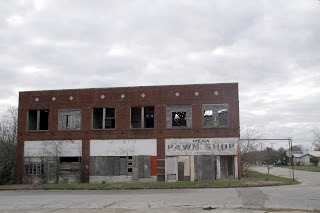 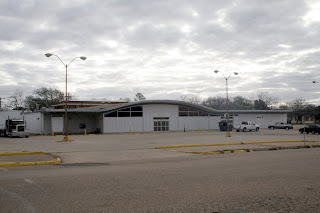 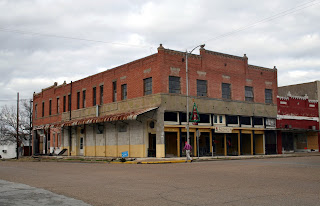 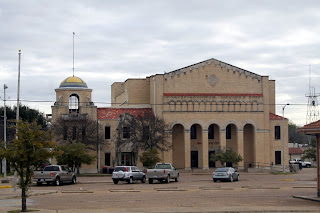 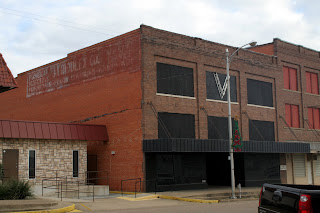 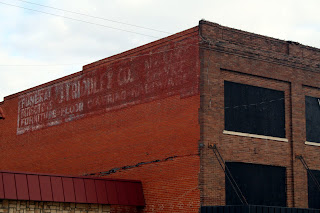 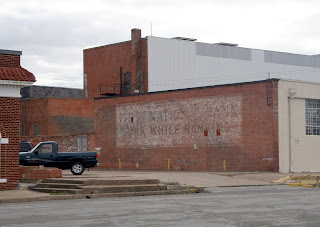 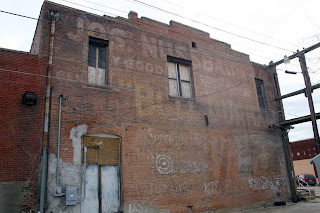 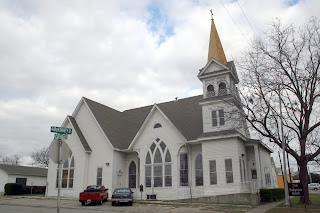 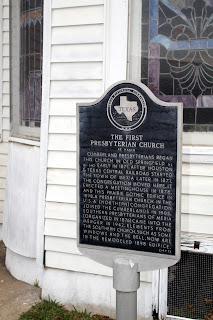 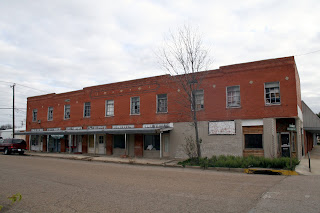 What lured me to Mexia: 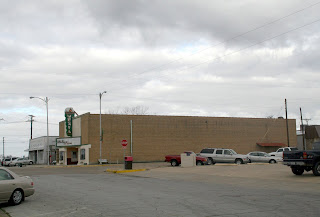 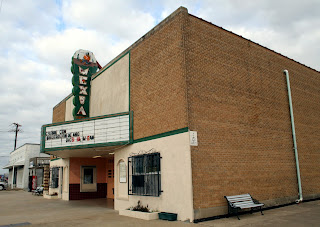 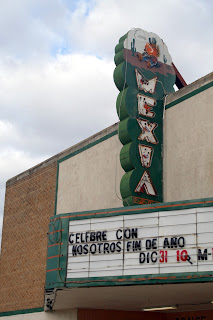 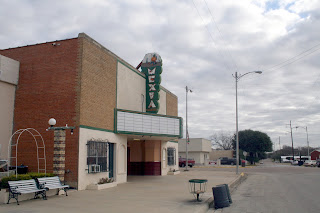 And finally, I drove right past this lonely, little place as I pulled in to Mexia, and I just had to stop and take its picture as I left: 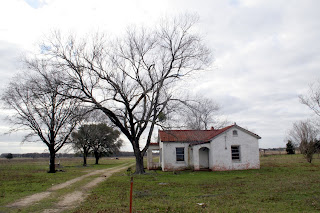 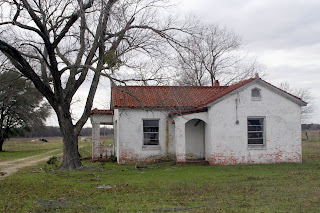 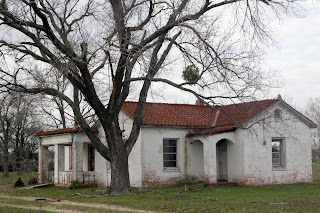 As a geophysicist living in boring East Texas, I always loved going thru Mexia because it has a fault zone. Inactive today, but it was pretty active not that long ago. Is Anna Nicole Smith the most famous person from Mexia?h

That's cool. I didn't know about the fault line! Perhaps that explains the quality of the streets and general condition of many of the structures. Thanks for the info.

I also had no idea she was from Mexia. I knew she was from Texas. She probably is the most famous person from there. I think Mexia is wise not to advertise that fact...

How cow, that place is a virtual ghost town....

There's a fault line that runs through the East side of Beaumont, right across Calder Road. My father delighted in mentioning that to me every time we went over the bump in the road the shifting earth casused.

At a thrift store in Mexia, when I was hugely, obviously pregnant, an old geezer shambled up to me and told me, "If your baby isn't born perfect, it's of the devil." That rivals the old Mexican lady that came up to me (still pregnant) at a Fiesta Food Store in Houston and said to me, "If you hear your baby laugh in your dreams, the baby will be a witch."

It was very nearly deserted, that's for sure.

Don't tell me you grew up in Mexia, Dorothy! Wow, pregnancy inspires people to be koo-koo.

Enjoyed looking at the pictures, sad though they are to those of us who grew up there and attended many a movie in the Mexia Theater. It's not really a ghost town, however. Go out to Wal-Mart, and you'll find some signs of life.

Then we can move to Mehico (Meee hi co)and away from Ma heeeee ah.

Hey Bill! I enjoyed your Mexia High School reunion blog! Great stuff there. I hope you don't mind my using a couple of your scans.

Hi. Thank you for posting these pictures. It is interesting and sad to see what has become of this town. I lived there right up until the beginning of third grade( I think 1979-80 ) at the North Wind Apts. I think I even attended the new elementary school when it had first opened. I have always wanted to go back one more time but now after having seen this I'm not sure. I did always wonder what became of most of the kids I was friends with. Anyway, thanks! Scott

It really isn't as bad as it looks. Yes, those are bad parts of this town, but there are also some nice parts. It is not completely a ghost town. Like one of the other posts said, go to Walmart and you will definitely see some signs of life. We have nice places to eat, a couple decent places to shop if you don't feel like making the drive to Waco. Yes, it is boring, but it is not as run-down as it looks from these pictures. To the guy above me, if you came back one more time I don't think you'd be upset.

There's another famous person from Mexia, besides Anna Nicole. Ann Williams, founder of world-class modern dance company, Dallas Black Dance Theater, is a native, too. Ms Williams has achieved many honors & much recognition in the dance world. The company has toured in many countries and represented the USA at the Arts Olympiad in UK, 2013, in conjunction with the Olympics. Dallas is rightly proud of the professional dance company she founded in 1976 and wishes Ms. Williams much happiness in her retirement, later this year.

The most famous thing you could do here is LEAVE it and let everyone know you're doing so. They'll think you're a genius. This is like being DEAD already! Hell, the HEB doesn't even carry sushi like EVERY other HEB I've ever been in! The Whataburger here is the slowest in the state, taking twice as long to get your order. When the line gets long, they run out and collect cash from cars and give them their order. Which is completely STUPID since the patron still must drive to the window to get their change! Now that's just plain STUPID.

Oh and the old piece of shit calling someone's kid a devil: Ask him when's the last time he's even seen a vagina and why he thinks he's going to fairyland with that EVIL attitude?

The only saving grace of this shithole are the cuties working in Jim's chicken but I'm older than their dad so I'm not sticking around unless one of them wants to be adopted... I still wouldn't stay here with the little minx.

Someone should tell these fools that the days of cheap energy are gone forever, this place will do nothing except shrink and they've cheated their offspring raising them here, ill equipped to compete in the 21st century, where they have REAL jobs, REAL housing and REAL women who know how to suck a dick!

Who's the PUTZ who thinks the eateries around here are good? What the hell were you raised on? Breaded steak, slopped in gravy.... why not just inject animal fat into your veins with a turkey baster for God sakes! "I dunno why I had 3 heart attacks".... yes genius and that's the sad truth of the matter.