Sinatra does his "thing" 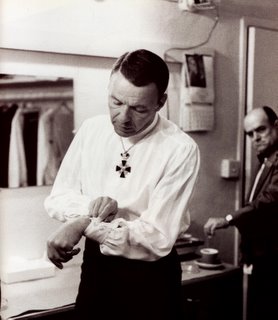 One of the things I admire about Frank Sinatra was his willingness to try nearly anything to stay on top as he weathered the numerous cultural shifts of his 50-plus year career. Marrying Mia Farrow is but one example. Another was donning a nehru jacket and love beads on national TV in 1968 for Francis Albert Sinatra Does His Thing.

As far as what his "thing" was supposed to be, here's what he read off of cue cards at the beginning of the program:

"This is our fourth little get together and I'd like to explain that the title of our show is in the patois of the youth of today. Now no one would really explain to me exactly what my 'thing' is supposed to be, but it can't be all bad, baby, because they let me do it on television."

Starring with Sinatra were artists he must have felt were vital and "with it". The "cutting edge" entertainers included The Fifth Dimension and Diahann Carroll. Knowing Sinatra like I do, my theory is he was actually just in the mood for a little dark 'n' lovely, seeing as both involved beautiful African American ladies.

You must watch at least the beginning of this vid. I can not allow you to leave until you do.

Sinatra more than makes up for the heavy cheese factor with the music, so it's worth a complete viewing. He does a medley of "Nice 'n' Easy" (a song he rarely performed live) and "(How Little It Matters) How Little We Know". I'm guessing he, or someone else, selected the latter due to the menition of "chemical" and "chemistry" in the lyric. It was 1968. The "kids" were all into chemicals and stuff. 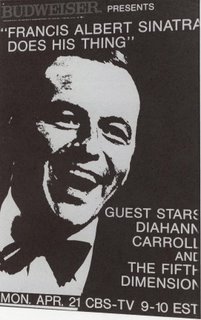 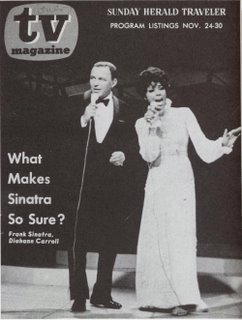 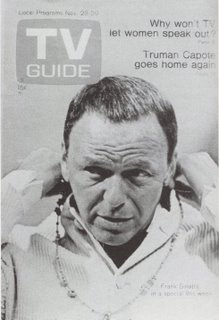 I wish I could have seen him live.
Wrong generation.

I love your site!

Thank you. I appreciate it!! You don't know.

I want to add my thanks too! I love this site and everything on it, but especially the Sinatra stuff. The hysterical thing is about that clip is that's the dress rehearsal. He got served with divorce papers right after the taping and decided he'd had it.

"I love this site and everything on it, but especially the Sinatra stuff."

Wow. I just wanted to read that a second time. Thank you very much! I'm just glad there are visitors, and the fact some visitors actually like what I post makes it all worth it.

As far as you dress rehearsal theory, I'm not sure about that. I could be wrong, but I think that's the actual performance. And the divorce papers--I assume you mean from Mia Farrow. Is that right? She served him with papers??

Thank you for these absolutely marvelous videos! I wish I could have seen him earlier than I ever did - once in 1979, and once in 1992. While those concerts were amazing, it would have been fun to have been there in Vegas.
Thank you!

Thays why he snuck up on Don Costa and bear hugged him. He thought there was another performance coming