"I Can't Believe That You're in Love with Me" 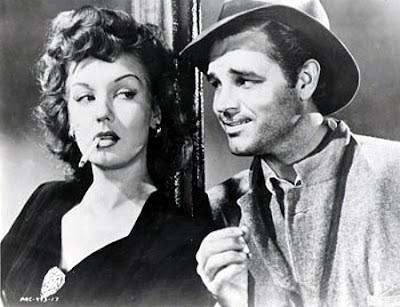 Tom Neal and Ann Savage
First appearing during a 1925 Broadway show, the Jimmy McHugh song "I Can't Believe That You're in Love with Me" was featured prominently in the 1945 film noir classic Detour. Being such an integral part of the plot and soundtrack, I thought perhaps it had been introduced in the film. I was wrong. 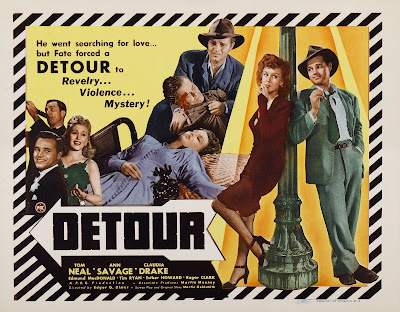 source
As the dramatic and eye-catching movie poster tells us, the protagonist, played by Tom Neal, searched for love in all the wrong places. Looked for love in too many faces. Etc. A series of fateful hitchhiking encounters while on his way to find his gal (and former girl singer in his dance hall band) led him straight into a typical noir sh*tstorm, or detour from his plans, if you will. "I Can't Believe You're in Love with Me" serves as an aural reminder to the main character (and movie viewer) of the love lost.

Everyone from Billie Holiday to Count Basie (with Joe Williams) covered the tune. But as is generally the case with these lost chestnuts, I tend to favor the version done by Frank Sinatra. Probably because I usually hear these for the first time via The Voice. This is from his exquisite, 1961 Sinatra's Swingin' Session!!! (and more....more?) album - the one on which he required arranger/conductor Nelson Riddle to take the songs they'd rehearsed for it and speed 'em up(!!!):