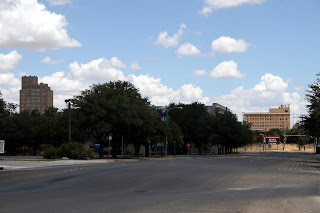 Today's history lesson, chitlins, is about Abilene, Texas. Now, first I must admit that every single time I saw the word Abilene, whether it was on a city limits sign or anywhere else, I was compelled forced to loudly belt out George Hamilton IV's 1963 single "Abilene" with a desperate, whimpering cry in my voice. After having been there, I could see why someone would write a song about Abilene, Abilene....


As I pulled in to town:

It's so dry and hot here in Texas that as I was walking around on the grass taking pictures of the courthouse, it was crunchy and crackly. A strange sensation.

This early ad downtown was first repainted in 1975. It's obviously been repainted since then.

This was the tallest building between Fort Worth and El Paso back when it was first constructed.


Some pictures in the hotel's windows:

And a slightly different view (I really liked this building):

One of these things is not like the others...

Upon leaving town, an unexpected surprise: