In search of Route 66 (ship has landed)

"Route 66 was completed through Santa Rosa in 1930. During the days of early Route 66, after travelers had tired of the long, hot, dusty miles, Santa Rosa became known as a welcome and well-known oasis in the desert. Travelers arrived in Santa Rosa to eat, rest, and perform car repairs, if necessary, at the many motels, cafes and service stations that lined the highway. 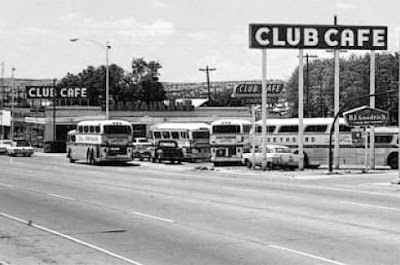 In 1935 Phillip Craig and Floyd Shaw built the Club Café. For more than fifty years, thousands of hungry Route 66 travelers would stop to enjoy a tasty home cooked meal.

In 1940, when Steinbeck’s epic novel, The Grapes of Wrath, was made into a movie, director John Ford used Santa Rosa for the memorable train scene, where Tom Joad (Henry Fonda) watches a freight train steam over the Pecos River railroad bridge, into the sunset.

In 1972, I-40 opened through Santa Rosa, and though the city remained a busy off-ramp, many of the vintage Route 66 businesses began to die. However, others continued to serve the exiting travelers of I-40, including the Club Café that survived for almost another twenty years. Finally, it too, served its last meal in 1991. The Club Café stood vacant and soon fell into disrepair with the passing of the years." (source)

Santa Rosa - a place where, once upon a time, weary travelers could stop and eat, drink, or sleep. In many ways, you still can. Yet there is an undeniable feeling in the air when one arrives of having just missed something special, being too late to the party.

The 32-unit Tower Courts, later the Tower Motel, opened across from the Club Café in 1950. Still open.

The La Loma Motel is an authentic vintage motel in Santa Rosa, New Mexico, and has been a favorite rest stop for travelers along Route 66 since the 1940s. You may be interested to know that the Campos family has run the La Loma since it opened, and we still do. We here at the La Loma believe that the route 66 traveler deserves a good nights rest at a great rate, so stop on by and experience the warmth and friendly hospitality of days gone by. (From the La Loma Motel's website)

Being so close to authentic, physical remnants of the Tiki culture craze always seems wonderfully surreal to me. This is one of those neon signs I've actually dreamed about and wanted to see for years, so I can barely believe it when I find them and there they are(!). I felt that a lot on this Route 66 road trip.

The Sun 'n Sand Motel is hard to miss with its restored sign, featuring the sacred sun symbol of the Zia Pueblo Indians.

Lettie's Restaurant, which overlooked Santa Rosa, invited travelers to enjoy the beautiful panoramic view of the valley while dining. It was operated by Albert and Ida Jo Campos, who later ran the Adobe Inn Restaurant. This building still looks much the same, and it is now the Route 66 Restaurant. (From Route 66 in New Mexico (Images of America) p. 26)

Standing there, it felt like 1960 - men were wearing dark suits, thin ties, all in hats, and JFK was president...