I went to Dallas this past weekend. I initially had around twenty things I wanted to find and photograph, but ultimately I shaved it down to around twelve. Dallas will require a return visit! One of those must-sees for me was Dealey Plaza. The experience of being there was very surreal. The shapes and outlines of the WPA pergolas and peristyles from the late '30s, early '40s, that triple underpass, the mysterious sounding "grassy knoll," the Texas School Book Depository, etc., etc. Those things have been burned into our collective long-term memory from repeated exposure. It seemed as if I'd been there before. I was profoundly moved by the whole thing and found myself unable to control my emotions, twice.

By the time I made it to the cenotaph (open tomb), to make sure I was actually there (going back to the feeling of "surreality"), I needed to slide my hand along the right edge of this low-hewn, black, granite square pictured above as I exited the structure. Out of a feeling of reverence and grief, I was obliged to quietly whisper the man's name ("John....John") as I reentered the Memorial Plaza:

As I walked down Main Street, past the former courthouse, "Old Red," (because the parade route went right by it, I kept thinking: "Kennedy saw this!") it was my first glimpse of the Plaza. That's one of the Plaza's two peristyles constructed by the WPA around 1938. The bronze statue is of George Dealey. And yes, wouldn't you know it, things were under renovation of some kind, so those pylons were everywhere, and the reflecting pools were empty and unaccessible. It's not as if I drove a total of around seven hours (to and from Nacogdoches) or anything to see this stuff. Oh wait a minute, I did. This is like when I went to London in '85 and there was scaffolding up around Big Ben, but that's another story...

Taking a right, this is the other peristyle. This one, and it's obelisk, was constructed in 1940. Walk a few more steps to the right, and there it is, that building:

The window from which Oswald fired his rifle is on the sixth floor, and it is left permanently "opened." Those shadows were cast by the upper portion of the Romanesque Revival, former Dallas County Courthouse ("Old Red").

Walking down Elm Street, from the Texas School Book Depository, this is one of two pergolas constructed for the Plaza, once known as "The Front Door of Dallas." To the left of the pergola is the wall upon which Abraham Zapruder sat as he made his fateful home movie. Also in the picture is the "grassy knoll." Perhaps you can see where the grass has been worn away by countless footsteps.

More of the "grassy knoll" can be seen here (to the right of the steps), as well as the picket fence, behind which it has been theorized a second gunman fired shots on November 22, 1963.

Another iconic image in my mind, the triple underpass/train overpass. I took this one as a train was making use of it.

This is the other pergola. As I walked through this one, I suddenly had a very pungent idea as to where the guys following me around, trying to sell me a Dealey Plaza souvenir newspaper, used the restroom during the day.

I walked across this grassy area in the middle of this shot photograph a couple of times as I explored the Plaza. It is here I had my "private moments," and lost it a little bit. I'm trying to explain in this post the feelings being at Dealey Plaza stirred in me, and it isn't easy to do. I was flooded with memories of 8th or 9th grade, sitting in a classroom watching the Zapruder film for the first time, memories of my mom and dad and remembrances they shared of that day (and Kennedy in general), and dozens of other memories created over the years as I've been exposed to television programs and coverage of November 22, 1963. A lot of that welled up in me as I stood in this part of the Plaza.

From the Plaza, I walked over to the John F. Kennedy Memorial Plaza. This is the cenotaph designed by Philip Johnson.

It seemed so much quieter within the cenotaph. Perhaps it was so designed. Either way, one is overcome with a sense of solemnity. As a Texan, I felt strangely guilty -- that here was honored the descendant of Irish immigrants, born in Massachusetts, educated in Cambridge, survivor of PT-109, "winner" of Jacqueline Bouvier, father of Caroline and John, ascendant to the pinnacle of American power in Washington, D.C., lover of Norma Jean Baker [whom he described as being like "electric velvet" (the dog!)], pally of Sinatra...and it all ended here, in the streets of Dallas, frickin', Texas. As Vonnegut would have said, "So it goes." 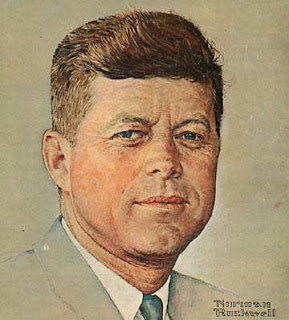 I'm gushing about your stellar photography over at retrospace. Go here

and collect your award. Congrats!

We went to Berlin a few years back to find the Brandenburg Gate covered over for some sort of clean up/refurbishment. Great! Still a brilliant place to go even so.

I was going to say there was a Kennedy connection there but of course JFK gave his speech out of town. It was Reagan who said "Mr Gorbachev, tear down this wall" in-front of the Brandenburg Gate. There's even a marker and information sign on the pavement at the very spot.

I commented on your end, but after I did this Dealey Plaza post, I realized the next day was the 50th anniversary of Holly's death. And I just couldn't bring myself to do two posts in a row, or two posts on the same day, both about such grim subject matter. I hate to disappoint, though!