I just finished watching the mediocre Into the Wild. I can tell I'm getting old, because I kept having to fight the idea while watching it that he's one broken bone, twisted ankle, etc., from a serious problem. Also, he wears glasses, so I'm thinking the way things go, he'll eventually break those. Finally, although I admire McCandless' idealism, I've experienced enough to know it was simply that - idealism. Unfortunately, his experience sort of proves me right.

McCandless grew up in Annandale, Virginia, located in affluent Fairfax County. From early childhood, teachers noticed McCandless was unusually strong-willed. As he grew older, he coupled this with an intense idealism and physical endurance. In high school, he served as captain of the cross-country team, urging teammates to treat running as a spiritual exercise in which they were "running against the forces of darkness....all the evil in the world, all the hatred."

He graduated from W.T. Woodson High School in 1986 and from Emory University in 1990, majoring in history and anthropology. His upper middle-class background and academic success masked growing contempt for what he saw as the empty materialism of American society. In his junior year, he declined membership in Phi Beta Kappa, on the basis honors and titles were irrelevant. McCandless was strongly influenced by Jack London, Leo Tolstoy and Henry David Thoreau, and he dreamed about leaving society for a Thoreau-like period of solitary contemplation. With little food and little equipment, hiked into the Alaskan wilderness to live a life of solitude. 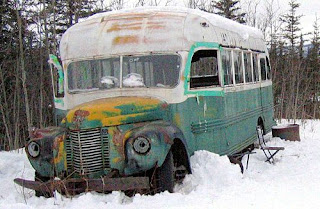 Man wants life of solitude. Willing to trade titles and recognition for life in the Alaskan outback, virtually unknown to others, living in a bus...how does the book/movie deal play into this? Oh the irony.

Well put and too true.

Yep, well said Kenna. However, I must say that I really liked the movie.
The other thing I always have found interesting, is that it's far too easy to throw away a life of relative luxury for the adventure of poverty IF you know that you're one phone call away from a plane ticket home to your upper middle class family.
Ed

Ed-I too liked the movie. I just thought it was going to be a lot better. I also sort of expected it to be more like Jeremiah Johnson, the old Robert Redford flick.

And I question why he would have taken that self portrait if he was truly committed to doing what he was doing. He must have always believed, somewhere, in the back of his mind, he would return to the society he so loathed.

The idea of pursuing an ultimate personal truth and, perhaps, one's connection to a higher power in one's life, is laudable and understandable but, what McCandless didn't learn (well, maybe he did in his last moments) is that its an INNER journey...in this case, "Location! Location! Location!" are the 3 ***least*** important/relevant things. Peace is a gift from God, not a one-with-nature location (where life is by definition "nasty, brutish and short") or, a blind-to-consequences adventuresome lifestyle....ask London or, Thoreau if they got what they came for...I'm inclined to think that they came away lacking.

Oh, and then there's this silly little thing that the Boy Scouts teach and practice, it called "The Buddy System" 'cause without it, and you are seriously injured AND ALONE, you, Sir, are totally phucked...and he was...and may have been okay with his phate.

Profound, tim. Elvis (Presley) wondered at how he could feel totally alone in a room full of people. Like a lot of people, McCandless had some issues to deal with before he could ever find the true happiness he was after. I think it is hypothesized Jack London committed suicide. Thoreau died at 44 - really too young (even then) to know the answer to your question.

That's my point exactly about the odds of getting sick, or physically injured. I hate to give anything away, but is it not the plant he ate which hastened his phate?