Something about loss, preservation, and obscurity

The drive to McKinney, Texas, turned out to be a bit longer (30-40 minutes; Garmin usually shaves at least 15 minutes off the Google time) than either Google Maps or Garmin told me it would be, so I was sort of dreading the drive back before I'd even arrived. But once I got there, it seemed to have all been worth it. I had a list of thirteen items to locate, tag and bag, the majority being Victorian-style homes. But I became bored by the houses after the third or fourth, which worked out, because I was soon reminded that McKinney has a handful of great, vintage neon signs (gems, really). Besides, old signs are far more interesting than homes built 130-150 years ago...

I knew about this sign, but, believe it or not, I had not put it on my list or even planned to shoot it(!) Glad I did now, though. It turned out to be more impressive in....person. The lady-working-the-front-desk/manager/owner/authority-figure-in-charge was sitting in a chair facing out one the windows in the office to the left the whole time I was taking pictures of the sign. Awkward.

Didn't know about this one, I don't think. No plaza left, as far as I could tell. I'd bet there are lots of people who grew up in McKinney during its (the plaza's) heyday who get a lot of memories seeing this old sign. Seems like the Camelot/castle/knights-in-shining-armor motif was very popular during the fifties and sixties (when I was growing up). How neat that "the powers that be" chose to leave this standing. Good on 'em.

Bad on 'em! The same darn thing happened in Austin.

The Ritz Theatre opened on October 8, 1928, with the Joan Crawford film Our Dancing Daughters. 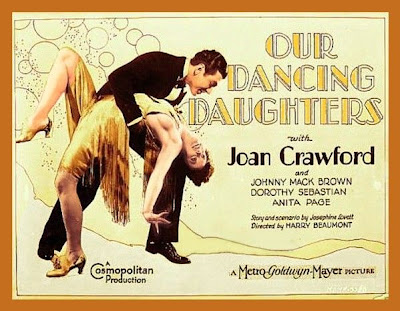 Must have been scandalous in McKinney!

Speaking of being easily offended, on to some Victorians:

Preserved, yet not quite the same. Texas Historical Commission photo from around 1982: 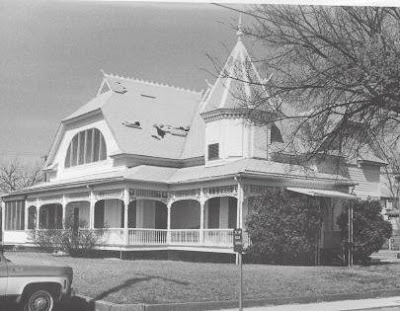 Heck, even the Google maps Street View is cooler: 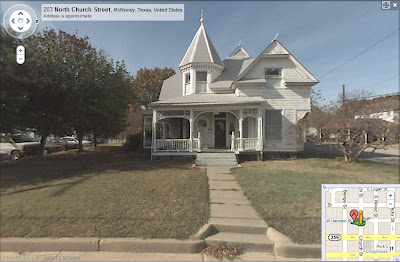 Phenomenal, I'd say! I think it'd been moved. 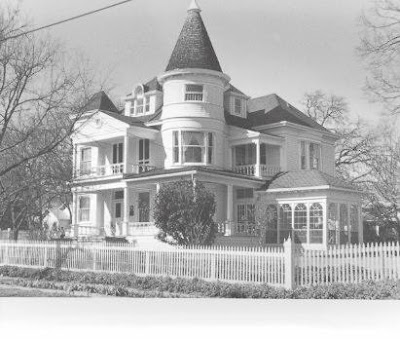 Like I mentioned, I got a bit bored with the hunt for the houses on my list, this feeling partly due to the healthy, summer vegetation. I should try to get back to McKinney in the fall when views are less obscured. Alas, this is part of being a photographer - you work with what you have, whether it's the sun (or lack thereof), telephone lines/cables, or overgrown/full vegetation:

So here is the THC Atlas pic of the 1902 Queen Anne, E.W. Kirkpatrick House: 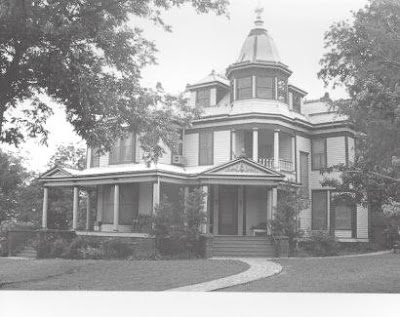 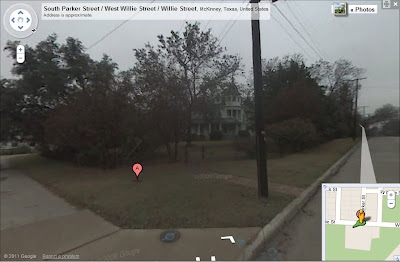 All I could get were glimpses:

I got a good, clear shot of the Kirkpatrick House barn (also 1902 Queen Anne) though:

According to the Texas Historical Commission's Atlas:


When built in the late nineteenth century, this structure was a massive Victorian dwelling w/ three-story towers at each end of the facade. William B. Largent, a pioneer merchant in McKinney, built the house. A fire in 1935 destroyed much of the upper level, but the ground floor retains much of its original detailing. 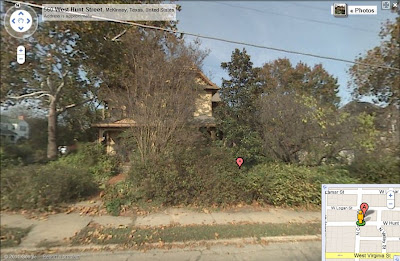 The Google Maps pic, by the way (very reliable): 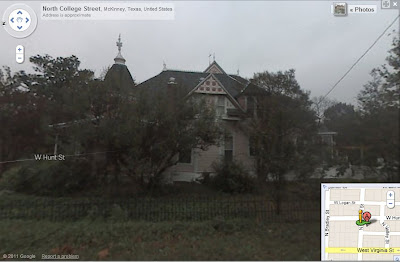 So after all of that fail (due to foliage), it was nice to find Bill Smith's Cafe, primarily due to its neon sign. This place has been around since 1956, and I've been wanting to photograph the sign since 2005. Obviously, this was on my list:

HUZZAH!
And finally, like the McKinney Inn MOTEL sign, I knew about this sign, but wasn't impressed enough to add to my list of things to shoot. But, again, I was very glad I took the time to get this: