A river of a novel


The illustrations are by Edward Windsor Kemble, and were included in the original, 1884 publication of the novel. 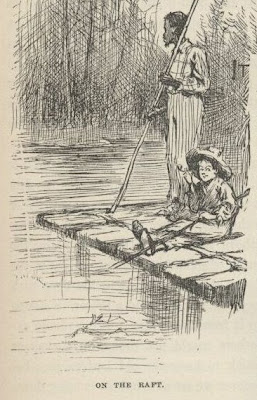 The French call an episodic, wandering novel a "roman fleuve" - the novel as a river. Such is Adventures of Huckleberry Finn. I've just reread it and have a couple of thoughts. First, being a little bit older and more experienced now than when I last read the book, I felt really sorry for Huck, not yet fourteen-years-old during the year of the novel's events, 1839. Despite being raised in hellish conditions by an abusive, alcoholic father in dirt-floor squalor and famine-level poverty, he is unfailingly clever (smart even) and surprisingly sensitive and sweet. Jim is treated so poorly throughout (and depicted so stereotypically, I assume), he almost doesn't register as a human being. Is he simply a stereotype, or were enslaved Africans really like that? 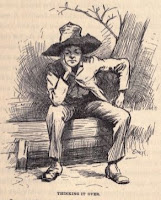 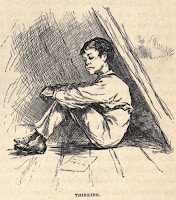 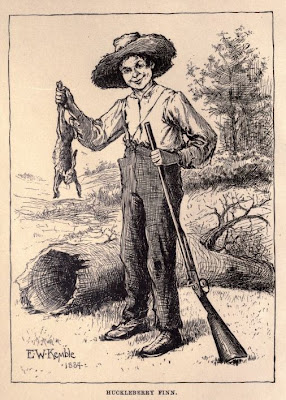 Secondly, Ernest Hemingway was absolutely right about the final chapters:

If you read it you must stop where the Nigger Jim is stolen from the boys. That is the real end. The rest is just cheating. But it's the best book we've had. All American writing comes from that. 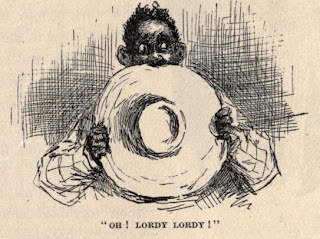 Hemingway is also quoted as saying the book "devolves into little more than minstrel-show satire and broad comedy" after Jim loses his freedom. That is a very accurate description. I found Tom Sawyer and his elaborate schemes tiresome, so I read through those parts very quickly. I kind of like the way this person succinctly puts it:

Read for my Mark Twain class, started on 2/2 and finished on 2/7. I loved the first 31 chapters of this book. LOVED. Huck is just the greatest character, and Jim is awesome, and yes. Unfortunately, in chapter 32, Tom Sawyer saunters in and has to mess it up for everyone. What a little assh*le. Go away, Tom. No one likes you. 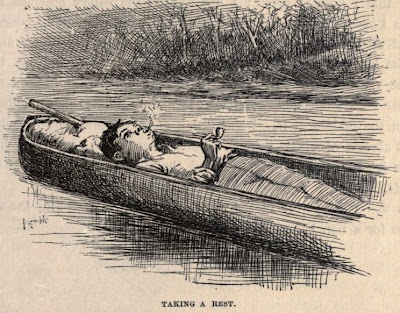 Yet the passages where Huck and Jim are out on the raft, floating down the Mississippi River ("the monstrous big river"), are prose as poetry, beautiful and stunning. Their drifting journey down the Mississippi "may be one of the most enduring images of escape and freedom in all of American literature" (source).

From chapter 19 ("The Duke and the Dauphin Come Aboard"):

"Two or three nights went by; I reckon I might say they swum by, they slid along so quiet and smooth and lovely...Sometimes we'd have that whole river all to ourselves for the longest time...It's lovely to live on a raft. We had the sky up there, all speckled with stars, and we used to lay on our backs and look up at them, and discuss about whether they was made or only just happened..." 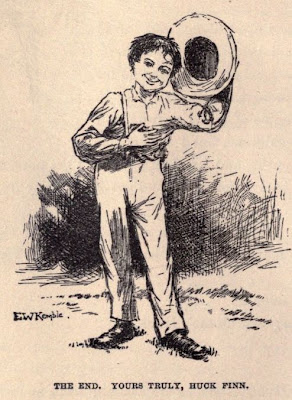 I used to live in Hannibal, MO where Mark Twain grew up and is the town used as a basis for Tom & Huck books. I haven't read this book in 30 years, but my son read it, or at least most of it.

I read somewhere that Spike Lee had thought of doing a version of Huck Finn or Tom Sawyer, but he would do the Blacks as smart playing dumb for the kids and the whites. Interesting take, I think, though I didn't describe it well.

That Spike Lee film would have been interesting. I can't believe slaves such as Jim behaved the way they did when they were out of the presence of whites. That approach would definitely "humanize" him.