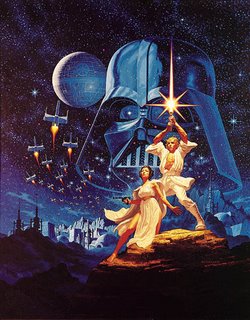 As Revenge of the Sith comes out today on DVD, many involved in the making of the Star Wars movies have mixed emotions. Producer Rick McCallum shares his "nightmare": "...since George loves to tinker with his films, one day when I'm old he'll wake me and say (speaks in an old voice), 'It's time to rework Star Wars — one ... more ... time.' ".

Here is a nice, similarly tinged with emotion, overview of the DVD from Obi-Swan at Ain't It Cool News.

Missed it in the theaters but saw the other two prequels first day. Bittery disappointed with the 1st one! 2nd was an improvement in most ways, I thought, but still far, far from great.

So I watched the new one on DVD just a few days ago (bigscreen TV, good Surround system). Gotta tell ya, I was expecting more of the same from SITH, and ready to be mostly disappointed once again... but I thought (for the most part) it actually rocked! I was floored and totally surprised by it myself.

Yes, it still shares some of the same flaws as the two before it, but not near as many, and the story, epic action sequences, and overall mood, finally got it all right and got this baby WAY up above the other two in my book! I dug it.

Still a more diehard fan of the original three, which I saw from the very beginning in theaters, as a wee lad, starting back in '77 (been a big SW fan all my life), but I did like this last one quite a bit.

You know, the first one (The Phantom Menace) seems much better, now that the prequels have all been done. It's better than Attack of the Clones. I can barely watch that one now. It seems so pointless.