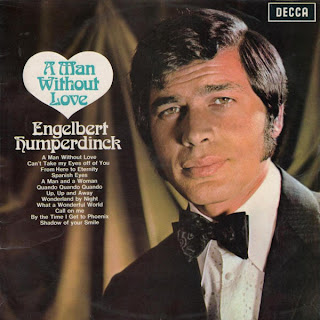 Now I know I'm getting old. Tain't no doubt 'bout it no mo'. And I'm slipping into stereotypical black dialect occasionally too, but that is an unrelated issue. While I may have liked this song somewhat ironically ten years ago or so, I now actually like like it...WTF? Engelbert Humperdinck?? The man who denied The Beatles' and their brilliant, groundbreaking "Strawberry Fields Forever/Penny Lane" single the top spot on the charts??? Dogs and cats, living together???? But I do like this beautiful damn song. I like it a lot. Good lord - just shoot me now before I start doing Tom Jones posts....

And here is a suave live performance (or at least recorded around the time of whatever program this was and then lip synced to) by Humperdinck. I thought the dude was about to bust some James Brown moves a couple of times during this:

On a trivial note, when Jake and Elwood first encounter Murph and the Magictones playing their Holiday Inn gig, "Quando, Quando, Quando" was the song they were doing. So if I ever thought the tune was corny (and I most certainly would have, sitting in the theater watching The Blues Brothers in 1980), this is probably why:

You sir, are insane. And I mean that with the utmost respect.

Lol - thanks. Yeah, I thought some of that might be a bit much. I like to think of it as silly, and not crazy. I guess there's a fine line!